Skip to Main Content
A Fine Spring Dinner – The Fridge, Chicken, Rocket and Cashew Sausages along with Harrington’s, White Pudding.

I was in New Plymouth for the weekend. It was a busy time, doing work that needed to be completed on my mother’s house, seeing the amber and black of the Naki resoundingly take out the final of the National Provincial Rugby Championship for the first time, and a visit to The Fridge, a butcher’s shop in Devon St. Inside the shop is a very impressive butcher’s block near the front of the shop. This striking butcher’s block is matched by the sausages they make.
I arrived at the shop a little after midday on Saturday. The door was shut and the shop looked closed. I spied a couple of guys out the back. I knocked on the door and convinced the butcher to sell me some snarlers. I was after the pork sausages they make as I have not tried this variety, however they had been sold out. There may be message in here… the good carnivores of Taranaki appreciate quality pork snarlers. In my next visit to New Plymouth I will definitely be back to try the pork snarlers.
I did buy some chicken, rocket and cashew sausages. I suggested to my mum that we have these for tea. She said she was not too keen on sausages, I guess I must have got my sausage loving genes from my father. Mum asked whether the rocket would give us our greens for the day. This statement could have come from a kid who was trying to avoid their greens, and I had to inform my octogenarian mum that only a very small amount of rocket would be in each sausage. I cooked the sausages for tea, mum did the veges. She liked the sausage, she mentioned that she particularly enjoyed the taste of the chicken meat, not bad from a woman who says she does not like sausages. 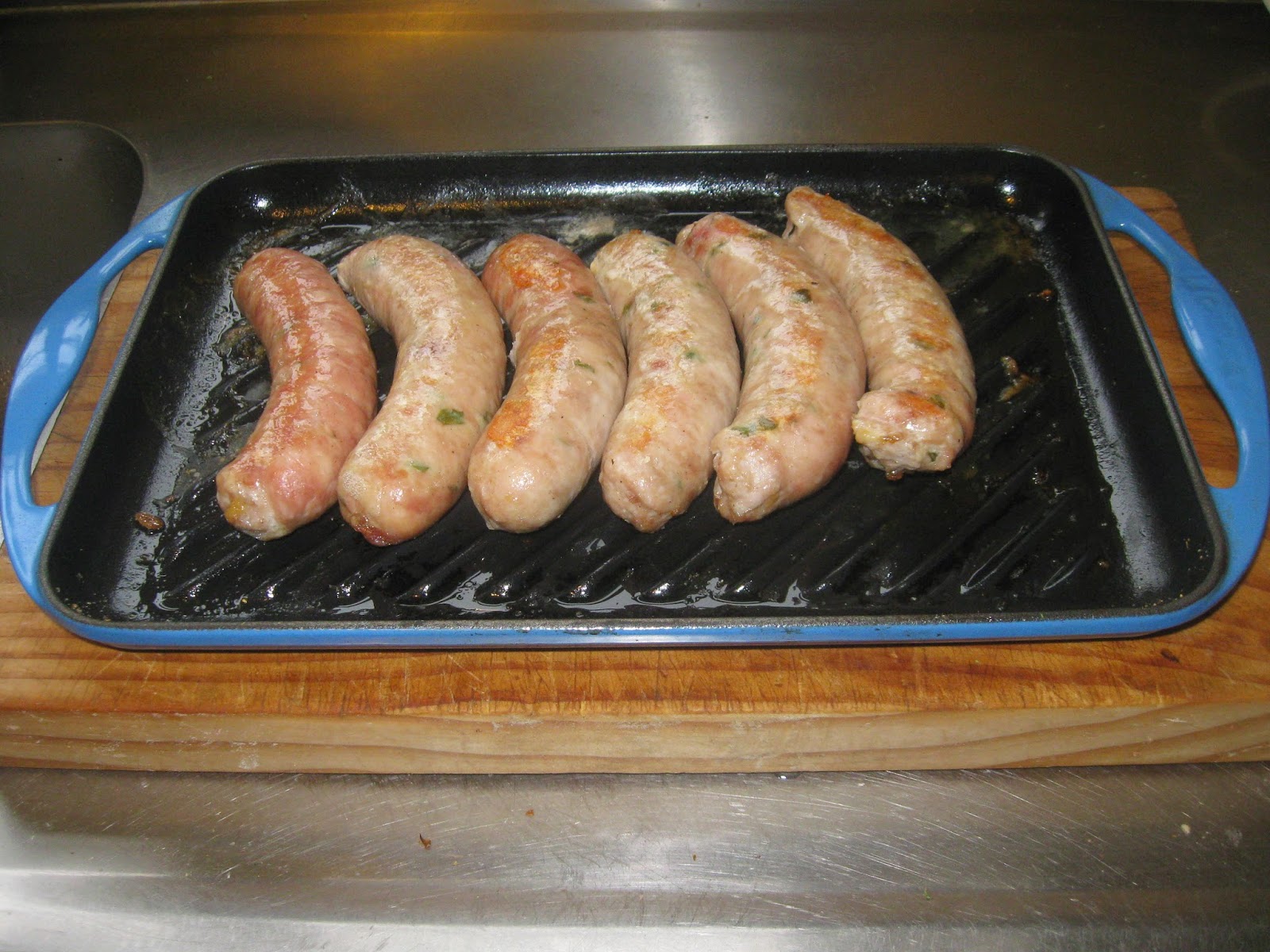 I brought some sausages home to Wellington and cooked them up along with Harrington’s white pudding. A simple dinner was prepared. I used a newish Le Creuset cast iron griddle that we purchased when were in Melbourne. It is a useful item to bake items on in the oven. Also cooked were some carrots, peas, broccoli and asparagus. To accompany the meal I made a blue cheese sauce. 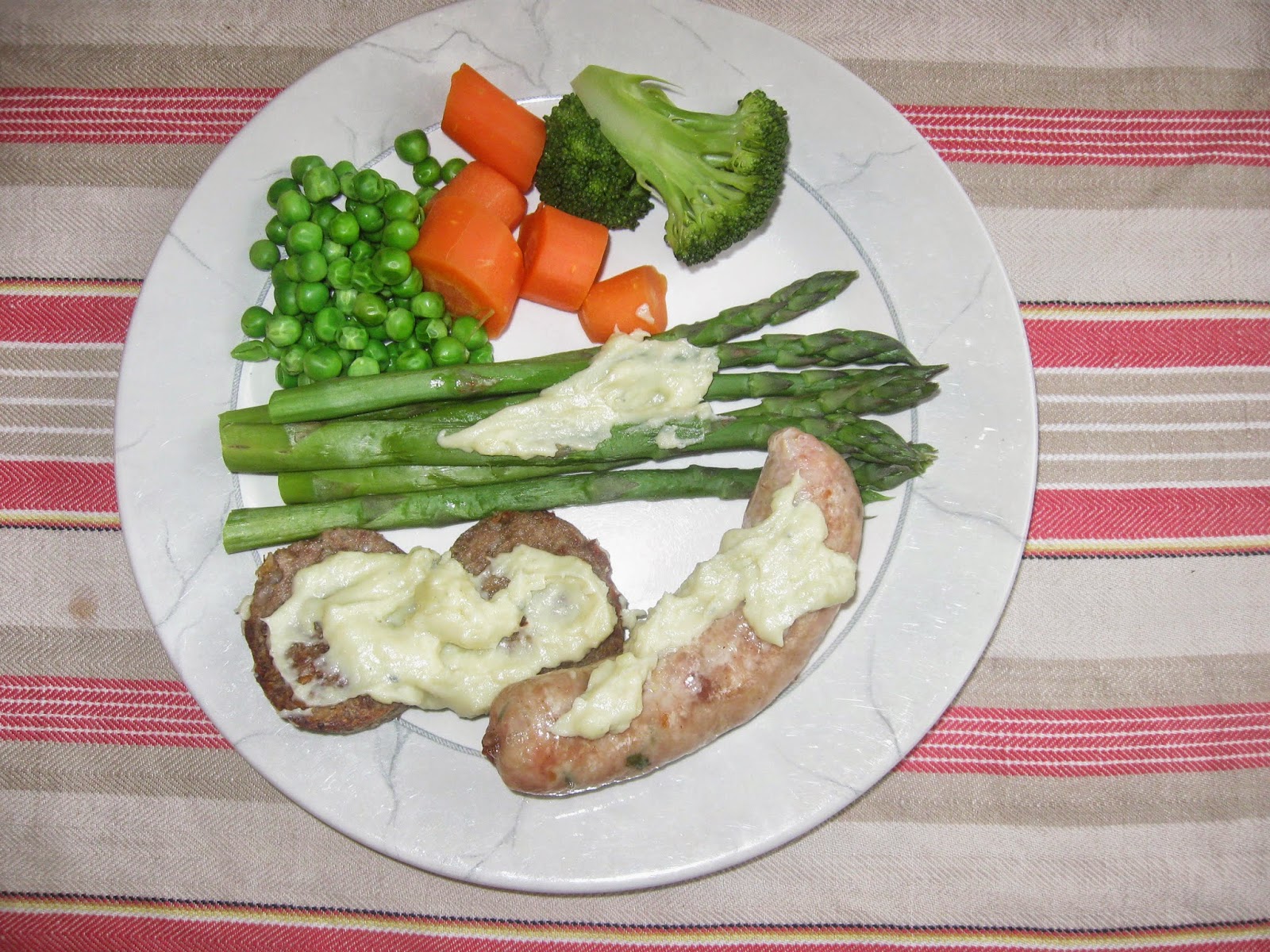 The finished product is pictured. The blue cheese sauce tastes better than it looks in the photo. The kids are keen on blue cheese and liked it with the white pudding and sausages. I considered that the flavour of the sausages needed to be the dominant taste, and used the sauce sparing on the sausage. The white pudding has a stronger flavour and the sauce can be applied thickly. The asparagus was very enjoyable with the blue cheese sauce.
The chicken sausages are excellent and I would rate them right up with the best of the best of chicken sausages. I regard these as superior to Island Bay Butchery’s chicken sausages, and I regard these as the best chicken sausages that are made in Wellington. My view on these sausages has been enhanced on a second and third sampling, for my initial review see here.
The white pudding is great complement to any meal and adds to a fine spring dinner. For a more in depth review see here.
This was an easy meal to cook and prepare for a week day evening meal.