Homemade sausages for the whanau wedding

It was a busy week as homemade sausages were produced for a whanau wedding. My cousin was getting married and he asked me to make homemade sausages for the wedding. The happy couple have attended a number of whanau Christmas’ so they asked for varieties of homemade sausages they that have eaten in the past. The old favourites of pork with blue cheese, pear and walnut, and smoked kielbasa. A request was made to use beef for the kielbasa, due to a low fat content in beef, I added pork shoulder to increase the fat content. 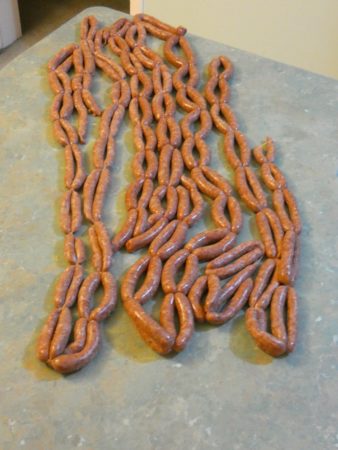 The kielbasa prior to smoking. 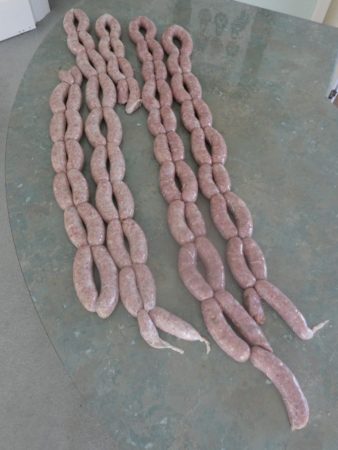 It was a busy couple of days as I made the sausages and then smoked the kielbasa. A mate from work came over and gave me hand to mix and tie the snarlers. I made a bigger smoker out of two wine boxes to increase number of sausages I could smoke at one time. I made 200 sausages in total. The smoked kielbasa were made with a thinner casing, while the blue cheese, pear and walnut used a bigger girth casing. 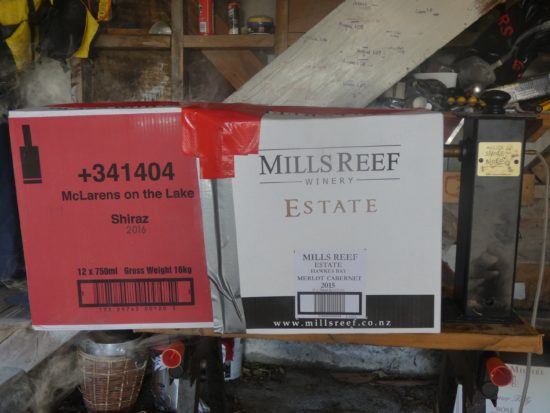 The double wine box used for cold smoking the kielbasa – the cold smoker “The Aussie Smoke Bloke” is on the right.

The couple had a wonderful wedding. After the formalities there was dancing and I was responsible for providing the late evening kai. The homemade sausages were served with bread. They rapidly disappeared from the table as happy and hungry revellers sought sustenance after the dance floor.

The following day I cooked more sausages for brunch, a gaggle of wedding goers gathered round the barbecue and as sausages were placed on the platter to go inside the hall, many were removed by hungry and appreciative wedding goers. The best compliments I received were for the blue cheese, pear and walnut pork sausages. I had issues with the smoked kielbasa holding their shape during the cooking. I am a hobby sausage maker who continues to learn. 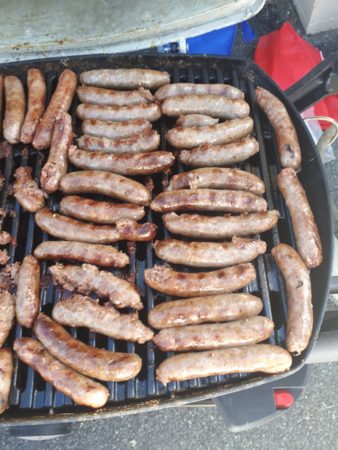 Smoked kielbasa on the barbecue – I did have an issue with some sausages splitting.

It was a great weekend of celebrating the new relationships, spending time with whanau, and enjoying homemade sausages.