Strict Standards: Static function Automattic\Jetpack\My_Jetpack\Product::get_manage_url() should not be abstract in /home/dodo1418/public_html/wp-content/plugins/jetpack/jetpack_vendor/automattic/jetpack-my-jetpack/src/products/class-product.php on line 182
 The Lions in Wellington – Don Stevens Sausage Blog
Skip to Main Content

The Lions in Wellington

The Lions rugby team have been in Wellington this week. On Tuesday night they played the Hurricanes. I went to the match but do not remember much about it. Earlier in the day I had my sixth and hopefully final operation on my leg. Having a general anaesthetic four hours prior to attending a major sporting event, was not part of the recommended recovery plan discussed with the medical team, however I was intent on going.

I took along a few Louisiana Reds that I had cooked the previous evening. I reviewed these sausages in May 2014 and I have been keen to eat some more of these for a while, however Eastbourne Village Meats never had them in stock when I visited. Fortunately on my trip last weekend was rewarded with a parcel of these quality snarlers. The strong aroma of garlic was present when you smelt them. They cooked up nicely. The Louisiana Reds are a subtle yet complex sausage, you can taste the subdued flavours of garlic chilli, cayenne and pepper, with pork as the primary flavour. There are flecks of parsley in this medium ground sausage. I enjoyed these sausages in 2014 and am pleased to say they are still a superb snarler in 2017. If you are in Eastbourne I recommend you try some. 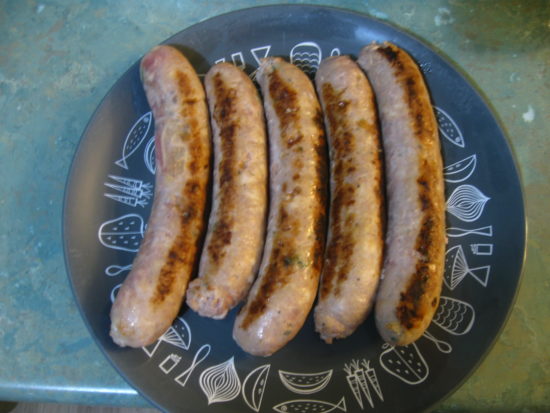 In what I am told was an exciting and pulsating encounter the Canes scored two late tries to draw the game thirty-one all. Bring on Saturday, I thought.

In preparation for the main event of the test match, I purchased Heller’s Stout, Mushroom and Angus Beef sausages. These sausages are 75% Angus beef, 11% Garage Project’s Aro Noir, and 10% mushrooms. They are a very pleasant sausage with the flavours of meaty beef being complemented by the Aro Noir and mushrooms. My mates at rugby enjoyed them too. I would rate these as one of Heller’s better snarlers. 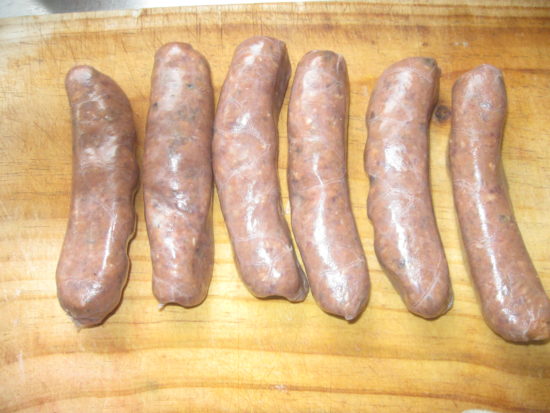 On the field the All Blacks lost for the first time in New Zealand since 2009. Sonny Bill Williams justifiably received a red card for a shoulder charge that connected with a Lions player’s head. Playing with a man down for three quarters of the game, assisted the Lions to a narrow victory. The Lions only led for three minutes of the match, however it was the most important three minutes, as it led to the final whistle. 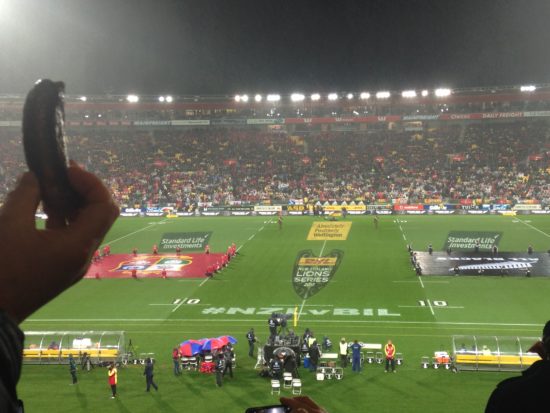 The sea of red Lions supporters were ecstatic at the result and I’m fairly certain there will be more than a few sore heads as they start pulling out of Wellington today and heading back north for the last match. There was a great atmosphere in the stadium and they certainly dominated in the battle of the chanting during the match. Lions supporters are always a lot of fun to have in town and there was plenty of good natured banter flying around the stands where we were sitting. It was a very good natured enjoyable evening. 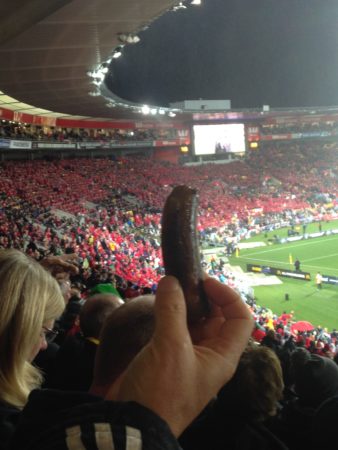 So the Lions head back to Auckland for the third and deciding test match. It will be a great game next Saturday. I sure I will have some sausages to munch on as I watch the game – I’ll keep you posted. And I await the return of the Lions to Wellington in twelve years time.