I took an air dried Spanish chorizo and a Swiss venison dried sausage from The Sausage Shed to our whanau gathering – see the previous post. I was asked to supply the snarlers for this gathering so I supplied took five varieties, with a variety to appeal to all tastes, from the seven day old baby (ok, I hear you cynics say – the baby is still on breast milk) to those well past their seventh decade. 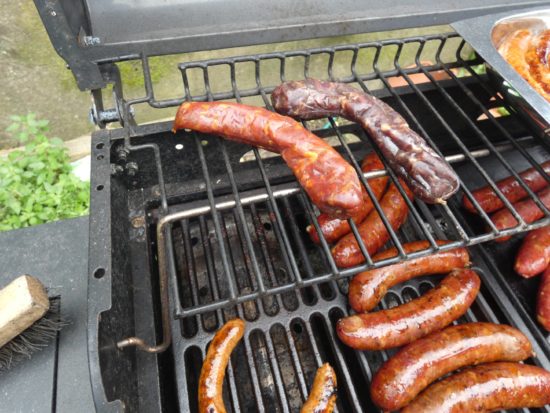 I heated these sausages on the barbecue warming tray. The barbecue was outside on an August day with a mild Wellington southerly so jackets and beanies were worn by the cooks. the Swiss venison sausage is he darker of these sausages.

These air dried sausages have fifty percent of their moisture removed, the removal of the moisture intensifies the flavour. I sliced these thinly for people to eat, they are tougher and chewier than a regular sausage, and this is a good thing. A small morsel of these sausages pack intense flavours. The Spanish Chorizo had moderate heat and complexity in the intense flavour, elements of paprika and pepper combined for a great tasting snarler. There were very positive comments from the whanau – the one that I found most interesting was from the cousin who had been a vegetarian for many years, and she was effusive in her praise. 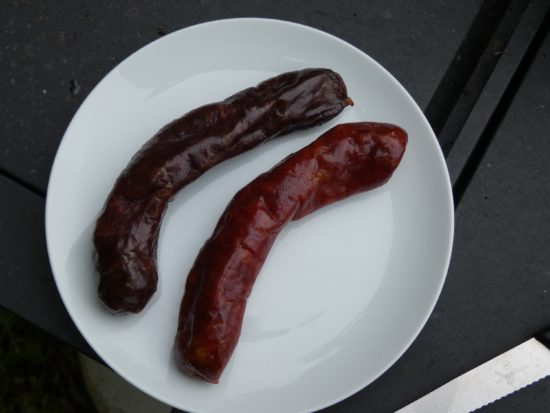 The Swiss venison sausage has a fusion of flavours, the venison is dominant, nutmeg is the secondary flavour, and there are also elements of garlic, pepper and red wine. This sausage was also well received. These sausages were little tasty morsels that added to the brunch we were enjoying.

The sausages that I have tried from The Sausage Shed are European inspired, but created for the Kiwi palate. I would strongly recommend that if you are Canterbury check this link to the markets where they sell their wares. You will not be disappointed.

For reviews of The Sausage Shed snarlers, click here, here and here.