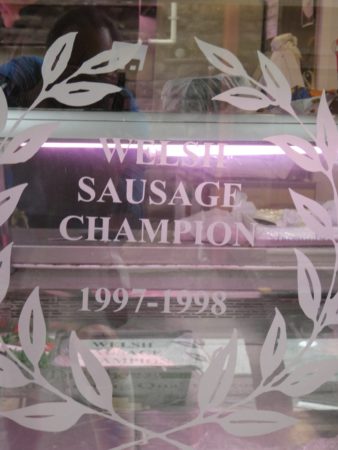 Today we visited Rawlings Family Butchers in Abergavenny, they have won numerous sausage awards, including producing the champion Welsh sausage. This butcher’s shop in the town of Abergavenny makes 84 varieties of sausages. Displayed on the outside of the shop are numerous sausage awards, including the champion sausage of Wales. We are in Wales visiting Sausage Boy, who is doing a gap year coaching rowing at a Welsh secondary school.

It was a hard decision but I restricted myself to purchasing four varieties of snarler. 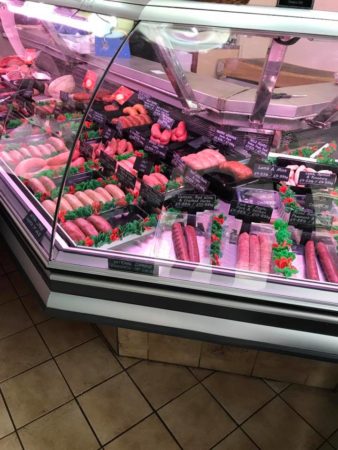 The farmhouse pork – this was the champion Welsh sausage. This is a very nice banger, a solid pork flavour that ensures the eater knows that they are eating a quality pork sausage. (The lighter of the two sausages pictured below) 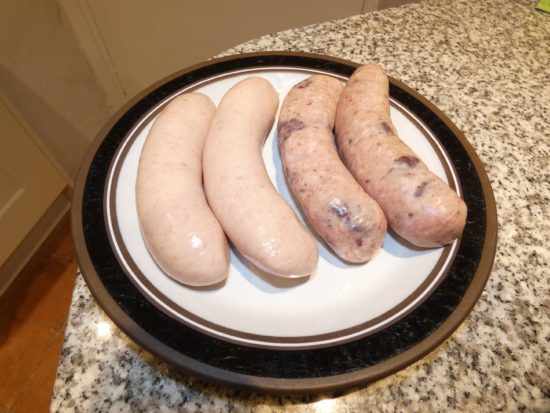 A salt marsh lamb sausage. The lamb has white wine, coriander and red currents added for extra flavour. Salt marsh lamb comes from the salt marshes of Wales. Grazing on the salt marsh gives the lamb a particular flavour and it is highly regarded by chefs and connoisseurs of fine food. This lamb sausage had a delicate flavour that was new to me. It was my wife’s favourite sausage (The shorter sausage in the pan).

A pork, apple and stilton sausage was appreciated by Sausage Boy. He thought it was preferable to the pork, blue cheese and walnut sausage that I make. The sweetness of the apple and pork is contrasted with the lumps of strong Stilton cheese (The longer sausage in the pan). 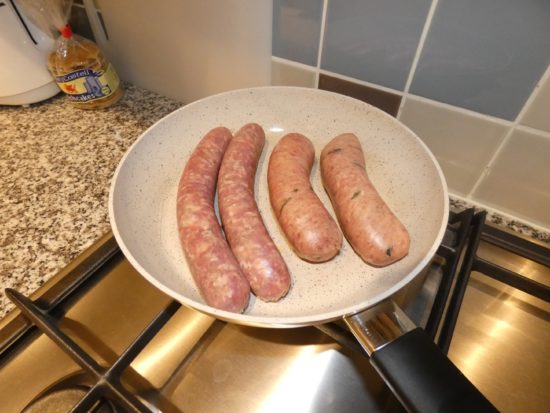 If you are in Abergavenny I would recommend you visit Rawlings and sample some of their wares. They also had a grand slam sausage, specially made when Wales won the grand slam in rugby. I suspect there would be ecstasy in the shop if Wales won the Rugby World Cup – I wonder what flavours Rawlings would use to create this banger?

We are going to Bath tomorrow, I wonder if we can come across another quality sausage shop?