Strict Standards: Static function Automattic\Jetpack\My_Jetpack\Product::get_manage_url() should not be abstract in /home/dodo1418/public_html/wp-content/plugins/jetpack/jetpack_vendor/automattic/jetpack-my-jetpack/src/products/class-product.php on line 182
 Pig of a Day – Wellington on a Plate – Don Stevens Sausage Blog
Skip to Main Content

As part of Wellington on a Plate, we headed to the Wairarapa for an excellent event titled – Pig of a Day. We had the opportunity to visit and meet the producers of Longbush Pork on their farm. This was followed by lunch at La Pancetta in Greytown where Rachel Priestley of The Prodigal Daughter shared her wisdom on curing and smoking meats. Seeing food on the farm and then a few hours later consuming the product on the plate was a great experience. 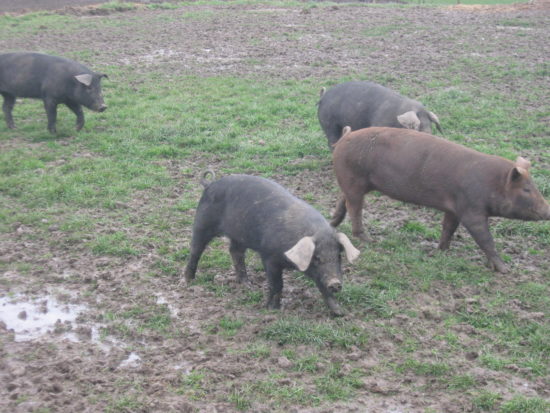 Longbush Pork is an ethical and sustainable free range pig farm. On nineteen hectares they have around 400 happy and content pigs. The pigs are Large Blacks and Durocs. Jeremy and Naya, the owners, have been on the property for a relatively short time and are working hard on developing their business. Despite the light rain and copious amounts of mud we were able to see the pigs up close, including sows with a litter, sows and boars, and growing adolescents. The hosts were friendly, enthusiastic and amiable as they talked about their farm. Recently Country Calendar did an episode on the farm which you can view here. 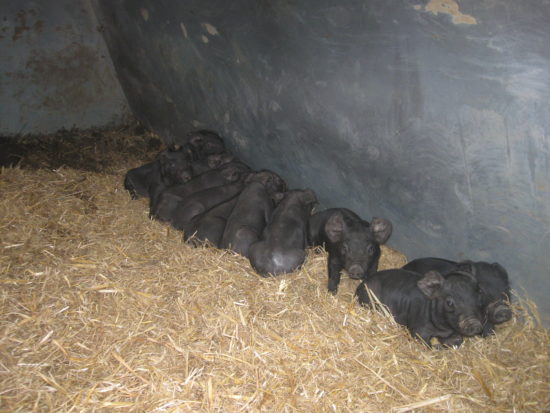 At La Pancetta Rachel Priestley spoke about curing, smoking and making charcuterie. She had a couple of legs that she had cured. I was surprised they were still there at the end of the lunch, as number of us wondered if we could fit them under our coats as we left. 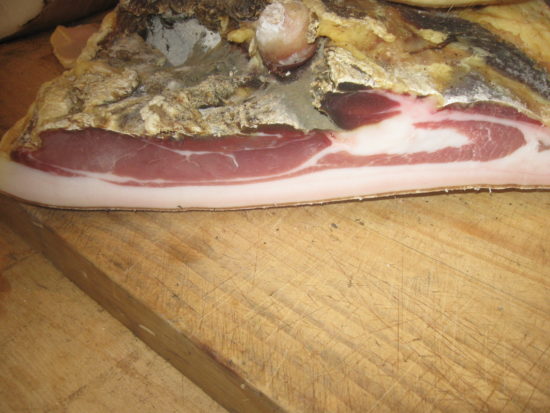 I took a couple of photos that show the different levels of belly fat between a duroc, smaller amount of fat, and a large black, a lot of fat. 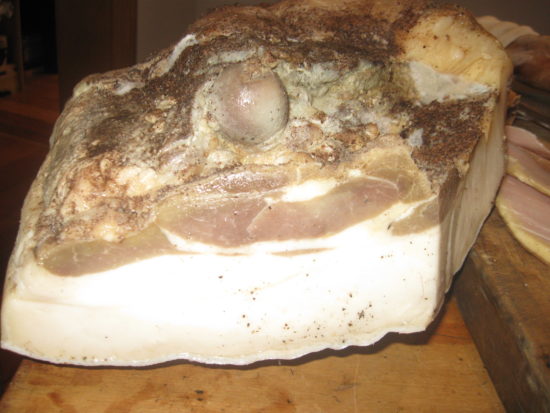 At La Pancetta we had delectable plate of charcuterie, which started life as a piglet on Longbush Farm. We then moved onto roast Longbush pork belly, fennel slaw, potato mash and plum sauce. The pork belly was incredibly tender and had great flavour.  I wondered if we might get bacon ice cream for dessert, but instead it was very luscious and rich chocolate Cointreau mousse.

Rather than purloining the whole cured pork leg, I purchased some charcuterie to take home at the end of the event.

There was a great bunch of people attending on the day – we shared our table with a couple were are keen smokers and curers of a wide variety of meats. They had travelled from Auckland just for the event. They attended Meatstock in Melbourne and Sydney where they judged and they will also be judging at next year’s Auckland Meatstock being held in February. I will see them again when I attend an evening called Masters of Meat next Thursday.

All in all a great day out on the farm, fine food and conversation – the joys of Wellington on a Plate.