Strict Standards: Static function Automattic\Jetpack\My_Jetpack\Product::get_manage_url() should not be abstract in /home/dodo1418/public_html/wp-content/plugins/jetpack/jetpack_vendor/automattic/jetpack-my-jetpack/src/products/class-product.php on line 182
 Escaping the Purgatory of Home – Don Stevens Sausage Blog
Skip to Main Content

After spending another five days in hospital for another skin graft, my recovery from the exploits contained in the previous post are taking time. I am largely confined to home, with the bed and the couch being the main places for the repository of my slowly healing body.

It was a glorious Sunday and my wife and I decided to drive to Eastbourne for brunch. We went to Cobar, sat inside and admired the still harbour. I took up an extra space as I need to have my leg elevated on an adjacent chair. 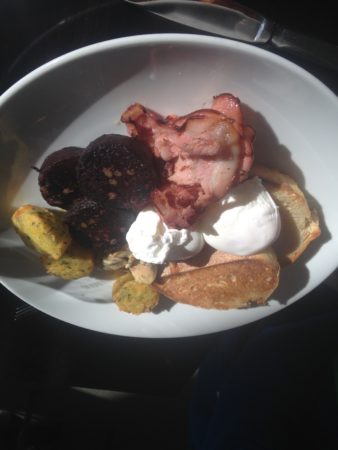 The brunch arrived with the black pudding, bacon, grilled tomatoes, mushrooms, potato rosti, poached eggs and bread. This well presented meal was appreciated by the hungry eater. The black pudding was mild on the palate and was soft to eat. It lacked the accentuated peppery taste of many black puddings. This is a pudding that will appeal to the masses. I considered the best item on the plate were the potato rosti – they had a contrast of textures, crisp on the outside, soft in the middle. My wife had a ham and mushroom omelette.

Cobar with its décor is big step up from your local café. However it didn’t cost any more than you would spend on brunch in less salubrious surroundings. I would recommend a visit.

That done, it was then back to couch and bed for more recovery.