Last night my wife and I attended a sausage making class with Rachel Priestley – The Prodigal Daughter. This was organised by Wellington Foodies and held at Crave Cooking School in Lyall Bay. It was a fantastic evening. Thanks to Lucy who put the evening together.

We started off with a few morsels from the master, or should that be mistress. Rachel shared a spicy Sicilian sausage she had made. This was served on bread with her own beetroot relish. Yummy. She made the sausage with five different types of chilli, and made them hotter than she would for regular sale. She thought as a group that we would appreciate a bit of a kick. And we did.
Rachel gave advice and many tips for aspiring sausage makers. She hand cuts some of the fat so you get bigger chunks of it in the minced meat. She uses pork forequarter and the fat from the back of the pig. It was great to be able to ask questions and have a discussion with people in the group who all had an interest in sausages. We were next to a guy who runs an impressive bbq website. Check this out here. And for his report on the class, click here. 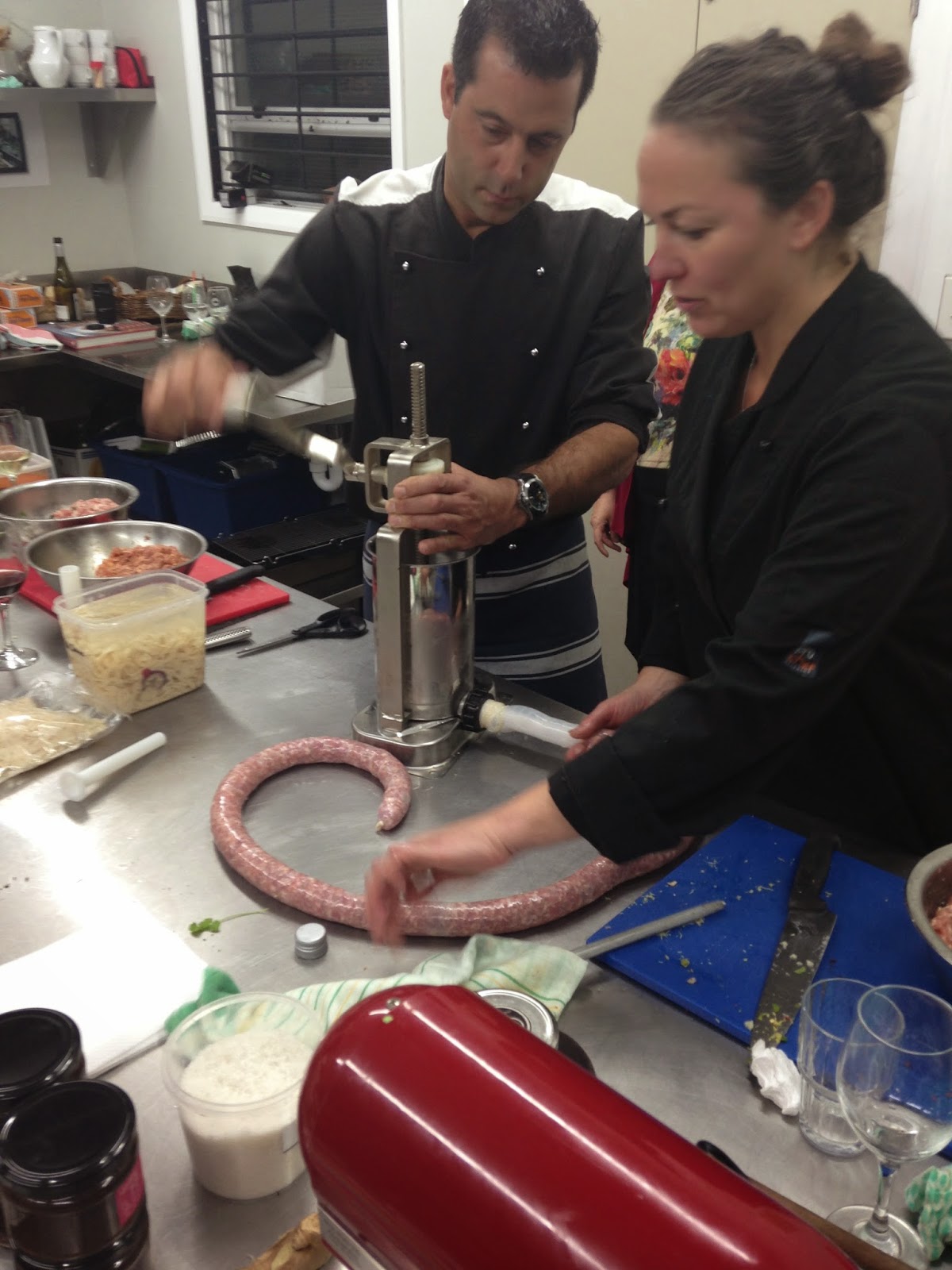 The Prodigal Daughter shows us how it is done. 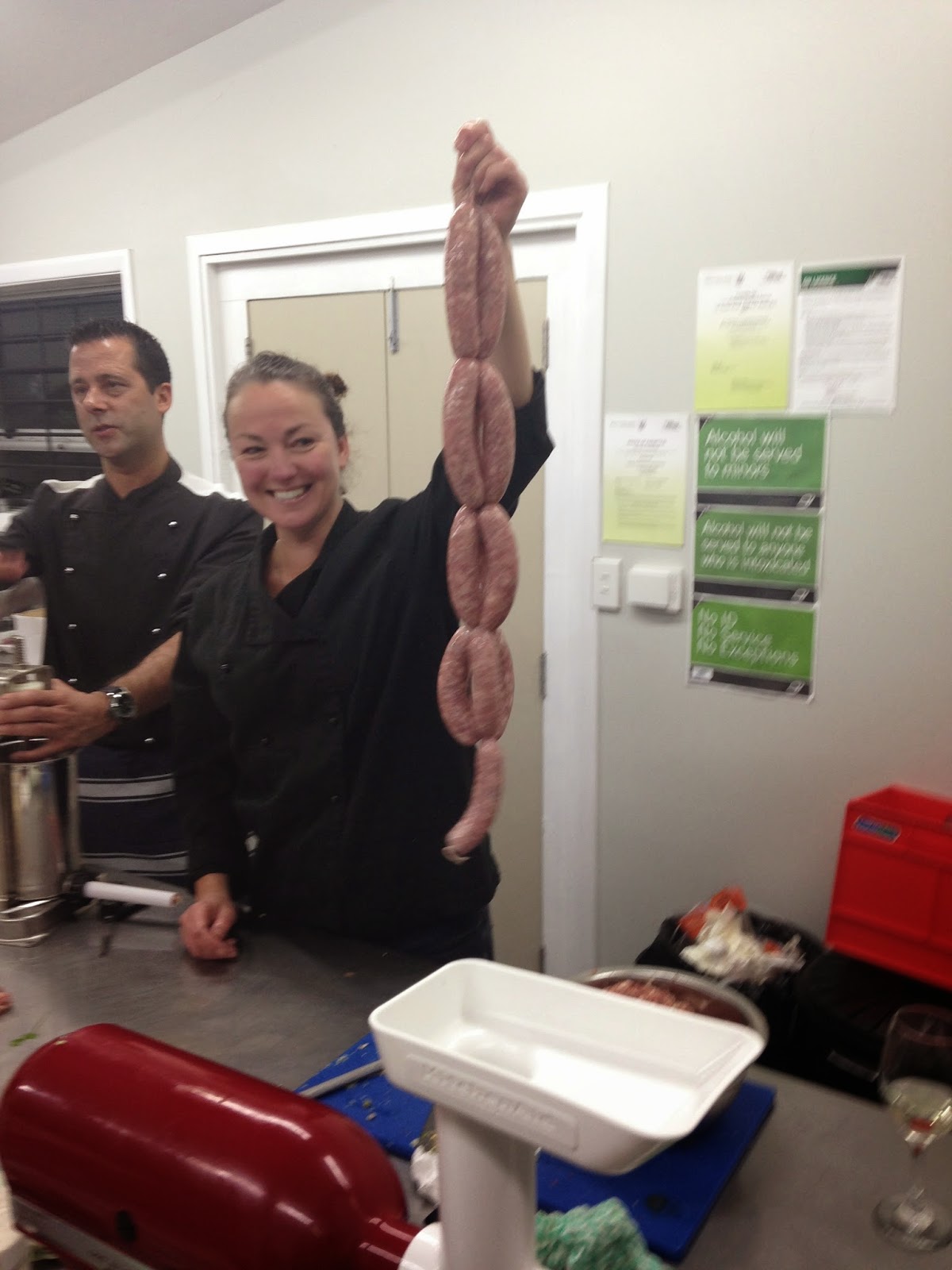 We were all given 1.5kg of preminced pork forequarter and fat. To this we added garlic, salt and pepper, wine and water. Once we had achieved what we thought was a satisfactory base we made a pattie that was cooked for testing. This was the tried and true quality control method. We then split the mince into two as we decided we wanted to make two different types of sausage. The big question was what spices, herbs and flavours were we going to add?
Our first sausage had fresh chilli, coriander and mint for flavour. The amount of each ingredient was determined by the look test. Yep, that looks enough.
Our second sausage had paprika, chilli flakes and ground fennel seeds added to the sausage meat. Again the highly scientific look test was used to determine the quantity of each ingredient.
Once again a pattie for each mixture was made and cooked in a pan. We thought both tasted ok. I do like the quality control aspect of cooking. 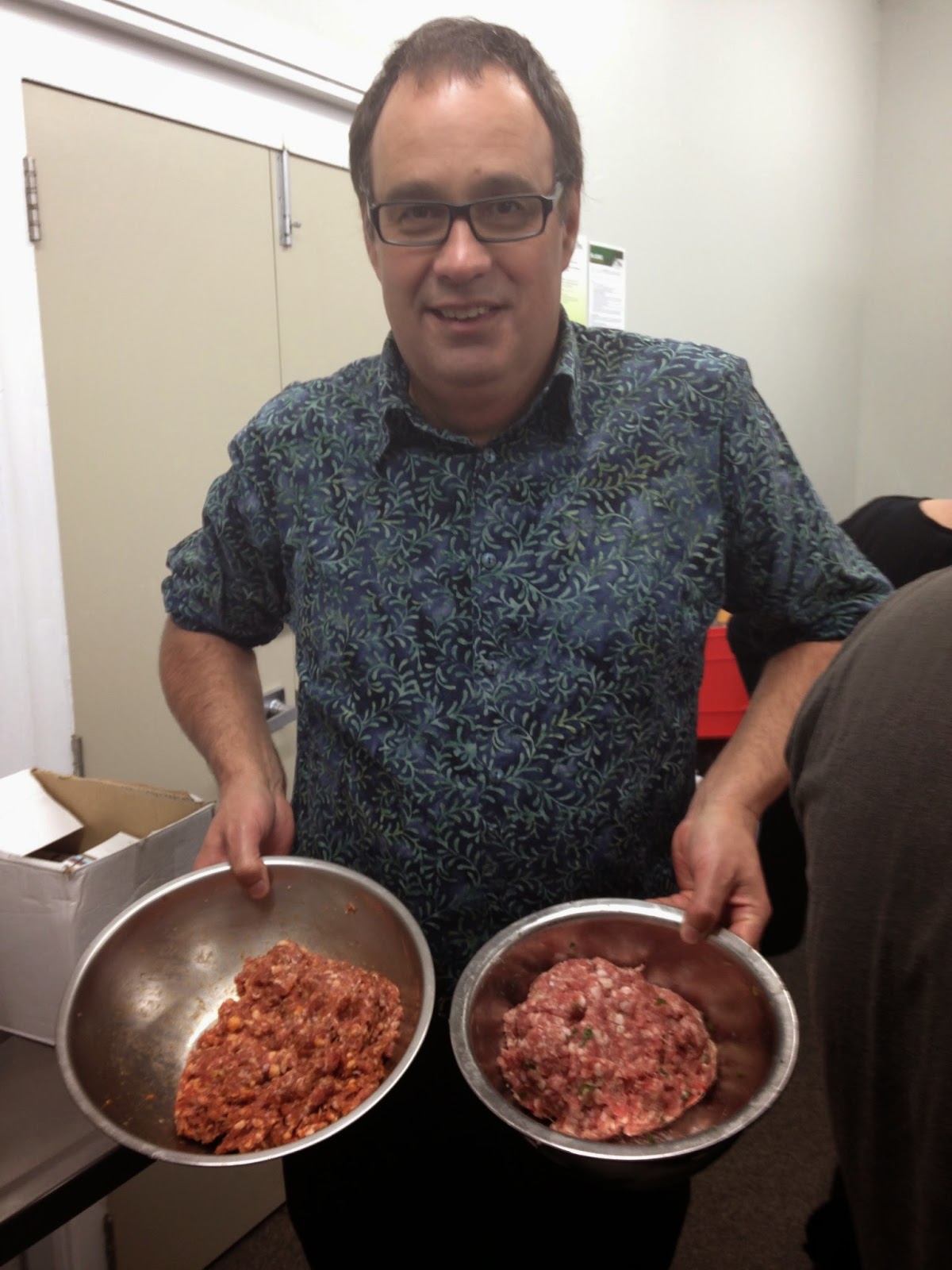 We made our sausages using a hand turned filling machine. The knack of rinsing the casing and putting the casing on the filling tube were skills that demonstrated the novice nature of our sausage making expertise. Packing the sausage requires skill too. Once again we demonstrated that we were beginners. The real art is tying the sausage. In this area I felt we showed some promise.
If the sausages were to be judged then marks would have been deducted off some of ours for air bubbles in the casing, different sizes of each sausages and uneven packing of the meat. However for a first attempt we thought we were pretty good. It was also good fun, and there was the expectation to eat the finished product.
Rachel informed us that our sausages would be judged for flavour. A pattie of each sausage was cooked. The judges comments about our fresh chilli, coriander and mint sausage was that it was the juiciest pattie and had good all round flavour. The dried chilli, paprika and fennel sausage received the comment that it had a well balanced flavour. Another sausage was the winner. A prize of the Prodigal Daughter’s produce was presented to the applause of all those in the class. 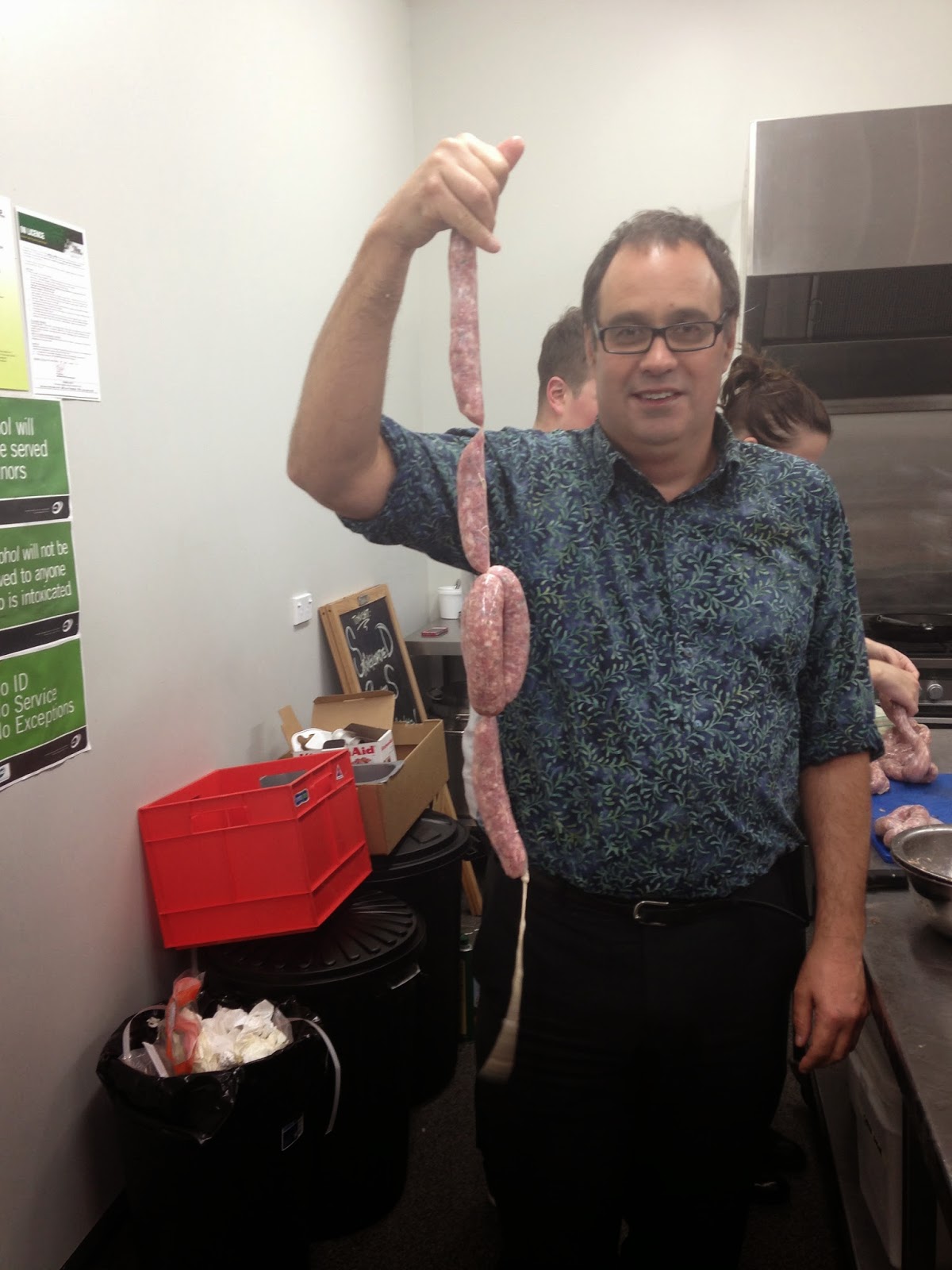 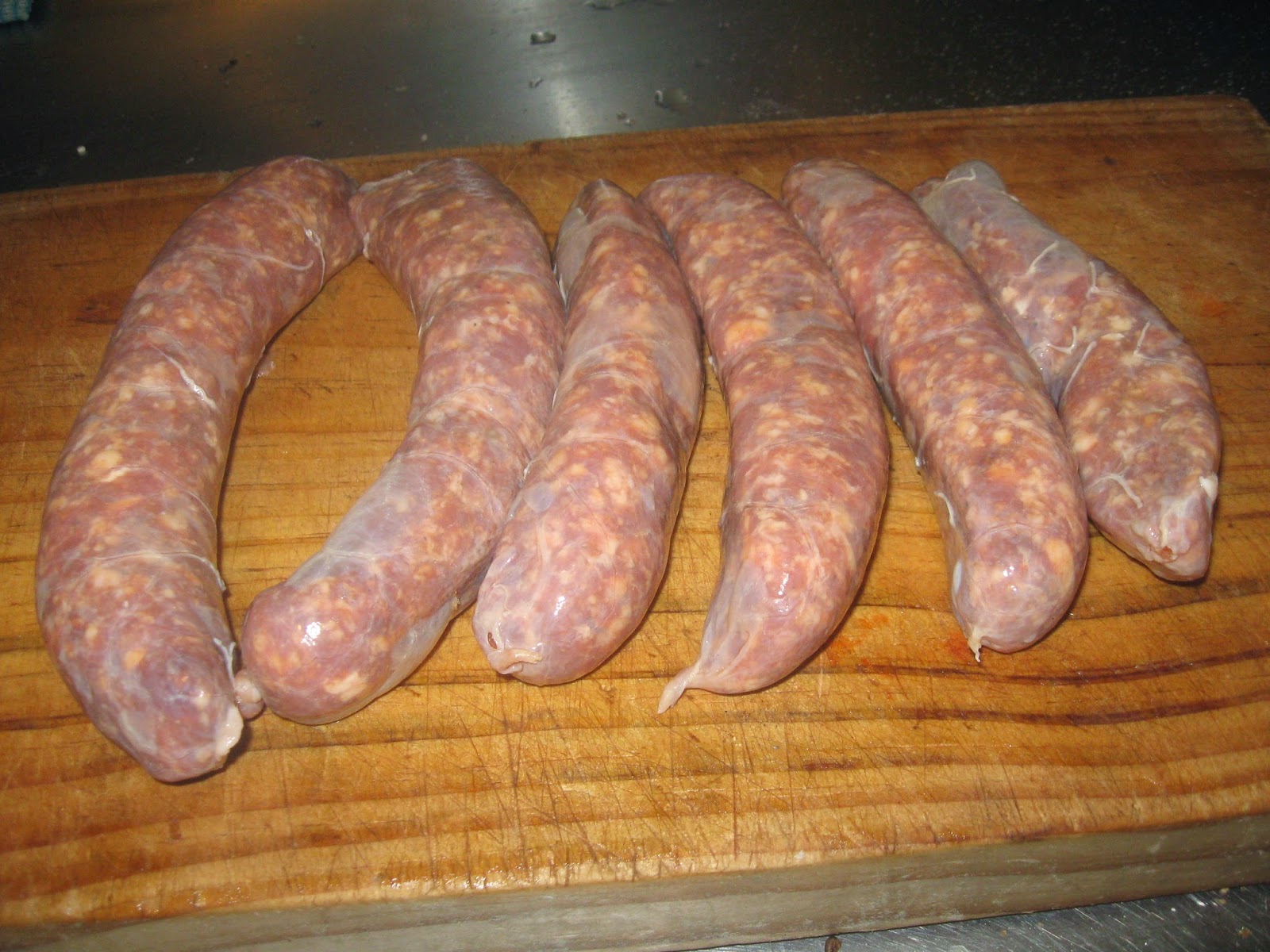 Note the different sizes for each sausage. 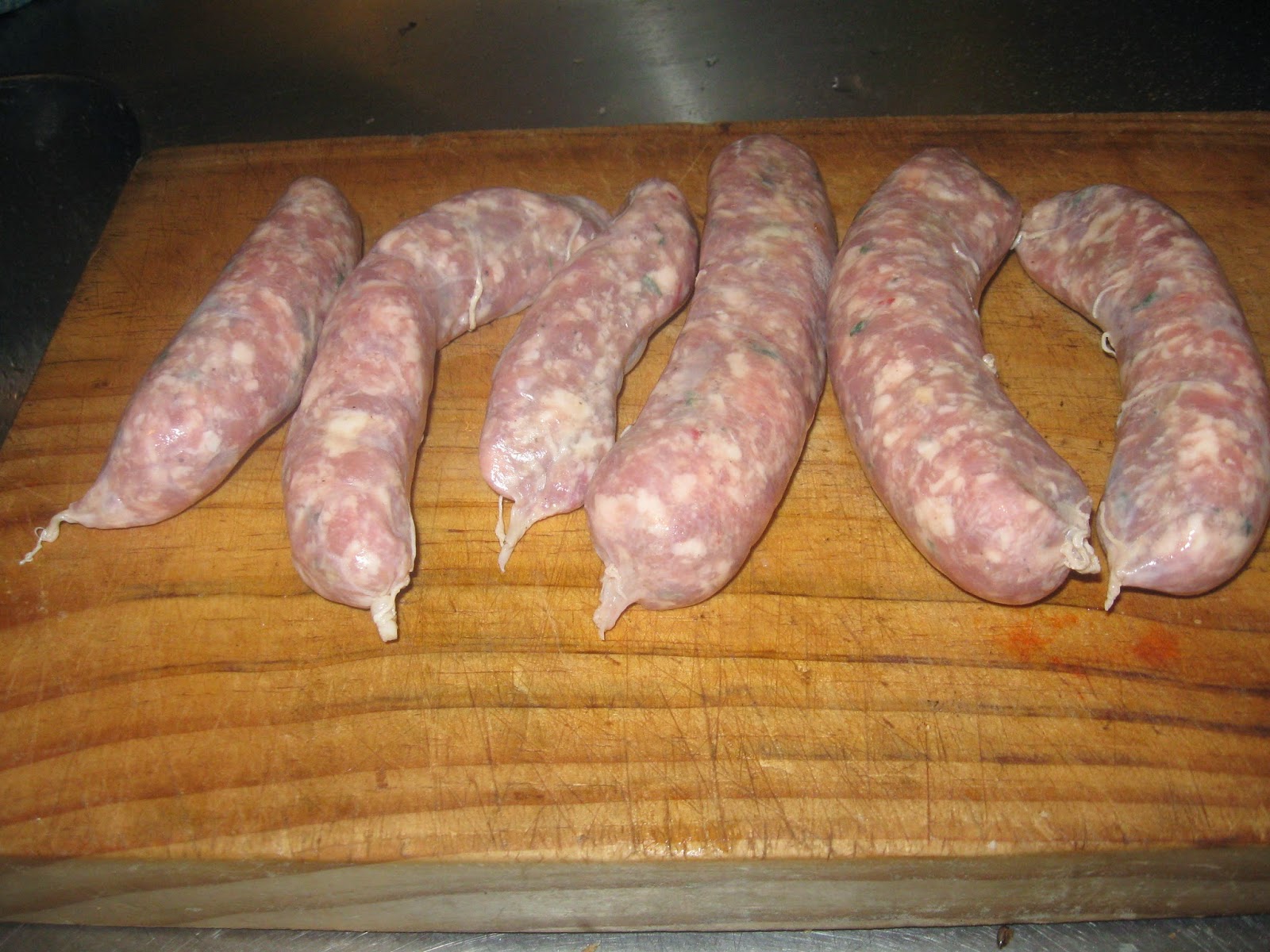 I was very happy with my first attempt at sausage making and have decided to buy one of the hand fillers to try my hand further at the fine and noble art of making a quality snarler. Watch for future postings on Don’s handmade sausages. 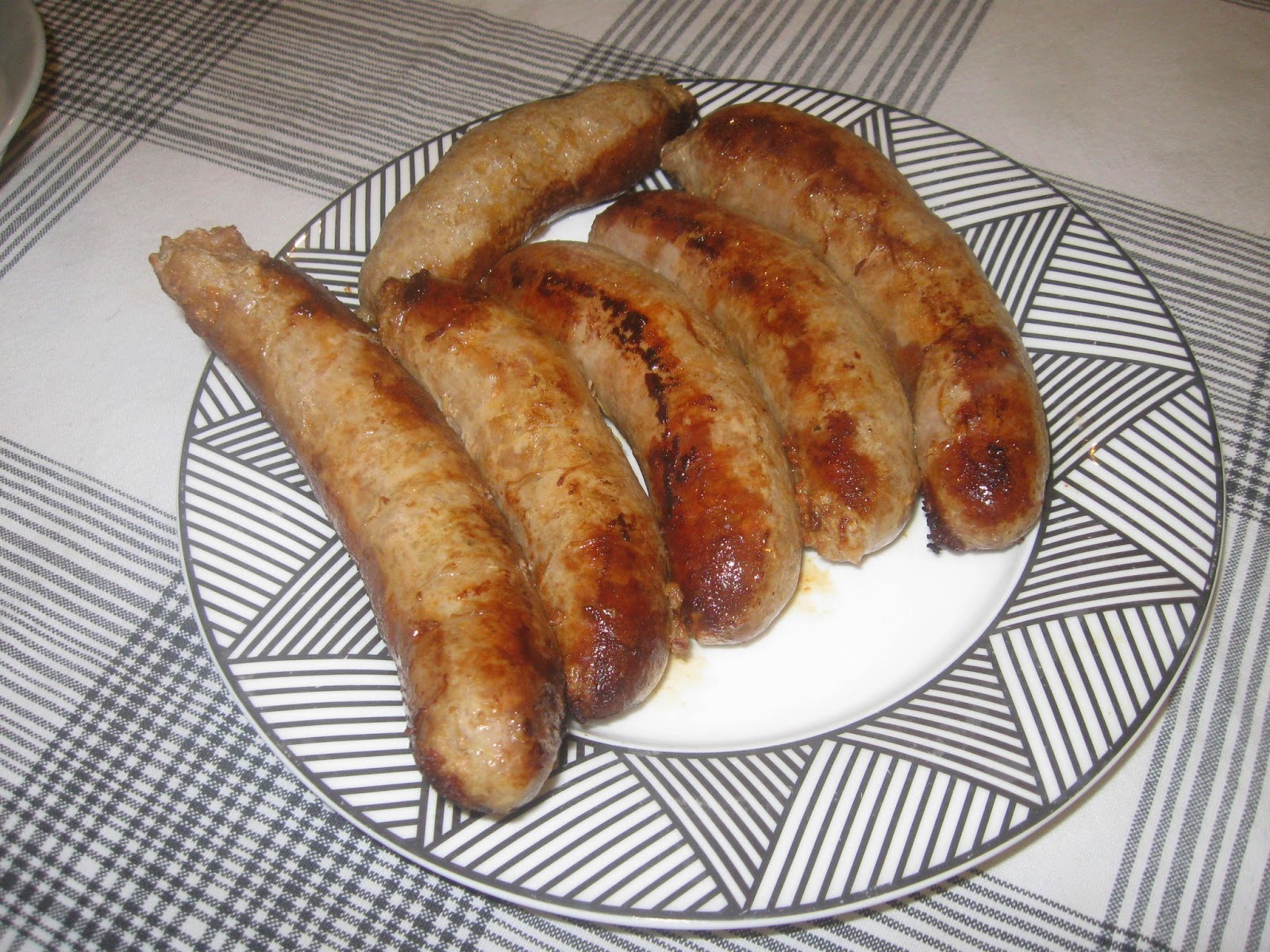 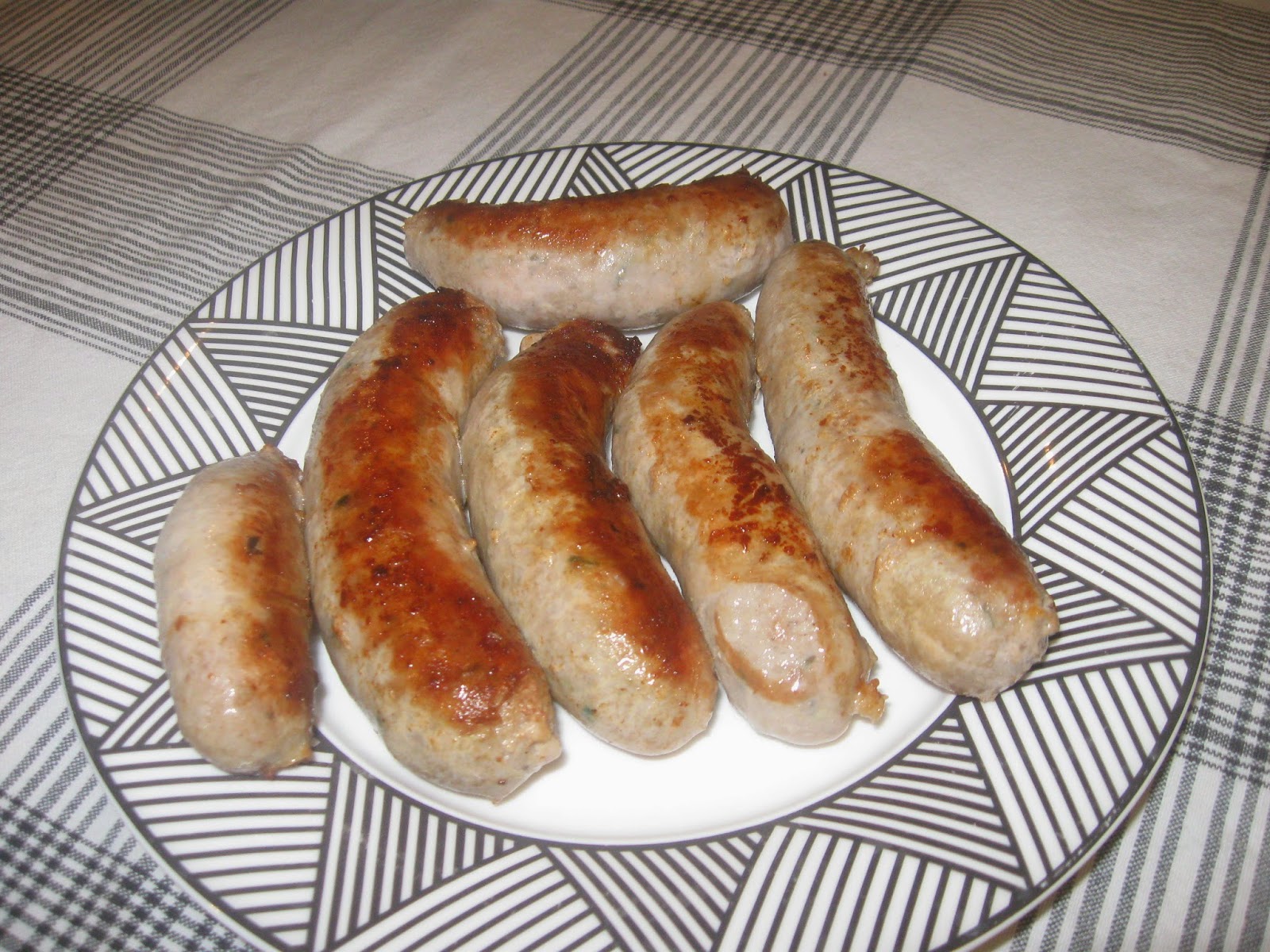 The key element in cooking is having an enjoyable time. Whether it is in the hub bub of chat at the cooking school, or the quiet contemplation of preparing a meal at home making food contributes to mental wellbeing. I enjoy preparing food, but most of all I like the consuming the end product.