Strict Standards: Static function Automattic\Jetpack\My_Jetpack\Product::get_manage_url() should not be abstract in /home/dodo1418/public_html/wp-content/plugins/jetpack/jetpack_vendor/automattic/jetpack-my-jetpack/src/products/class-product.php on line 182
 The Upside of the Earthquake – Don Stevens Sausage Blog
Skip to Main Content
The upside to the earthquakes
You can get parking in Christchurch for $2 a day.

This weekend we went to Christchurch for a friend’s fiftieth birthday. Four classmates from Northcote College, on Auckland’s North Shore, got together to relive their youth and tell lies, truths and laugh about their life at secondary school and beyond. More than thirty years later, they live in Auckland, Christchurch, Wellington and London. I am married to one of these people.

I had not been to Christchurch since the big earthquake of February 2011. I was last there in late 2010 when the damage from the first earthquake was evident. This weekend I rode a bike from the house we were staying in to the centre of the city. There are large vacant plots of land where buildings once stood. When you get to the red zone you can see the damage to some of Christchurch’s landmarks. Below is the Art’s Centre and blocks that have fallen, or been removed, as the building is restored. The Cathedral in The Square has lost its spire. On the right hand side of the shot there used to be a block of buildings that have been demolished. There is still a great amount of work to be accomplished. 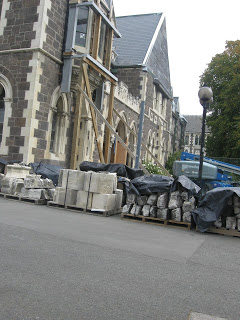 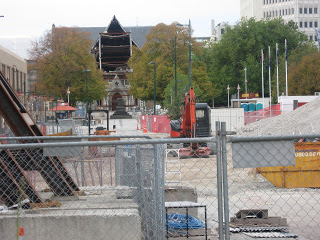 There is an upside, many vacant lots are available for car parking. You can park for $2 a day, which is very cheap. However I’m not sure we would want to have to go through an earthquake of that magnitude just to achieve such cheap parking. 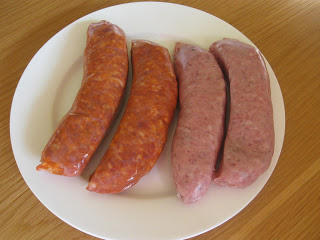 My wife went to The Mediterranean Food Company and came back with some sausages from the Akaroa Butchery and Deli. These were mild Italian and chorizo. There was two of each. As I cooked these on the barbecue the question was asked by another guest, why are there only two?  As I replied I would have bought a minimum of six, or maybe eight. Anyway they cooked nicely and were served as a pre aperitif, that’s the special tasting you have before the aperitif for dinner.

The mild Italian are a pork based sausage with seasoning; parsley, sage and thyme, and maybe a hint of nutmeg also existed in the flavour. They are a pleasant but not spectacular sausage to eat. They are ground to a slightly more coarse texture than fine. These are ok sausages, and I would buy these again.
Cost per kilo: $22.00 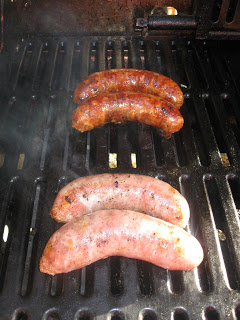 The chorizo had the ingredients labelled as pork, wine, paprika, salt and garlic. On the continuum of chorizo that I have reviewed on this blog, this sausage is good. It is a medium spiced sausage. It was also pleasant to eat, in fact I could eat three or four of these if only my wife had provided for us better than she did. However as with the other sausage there are better examples around.
Cost per kilo: $22.00
After the sausages were consumed, champagne was opened. Martin, our host, told us that my wife and other school friends who were there for the weekend had given him and his wife 24 champagne flutes for their wedding over 20 years ago. Until February 2011 they had not broken one. However after the big earthquake only four remained. These have now been replaced and the champagne, memories and laughter flowed.   If only there had been more sausages!