Over Easter I decided to head for the hills. The weather forecast was not great, but there was a window of about 36 hours which looked promising so I decided to head up onto the tops. During the last couple of times I had been along the ridgeline of the Tararuas I was going at a reasonable clip, either training for an event or participating in a mountain running event. Although I was a bit stuffed during the Tararua Mountain Race in March, I found some parts of the event very peaceful as I moved my way amongst the clouds along the ridgeline. I wanted to go back to the tops and enjoy having time to engage with the environment. 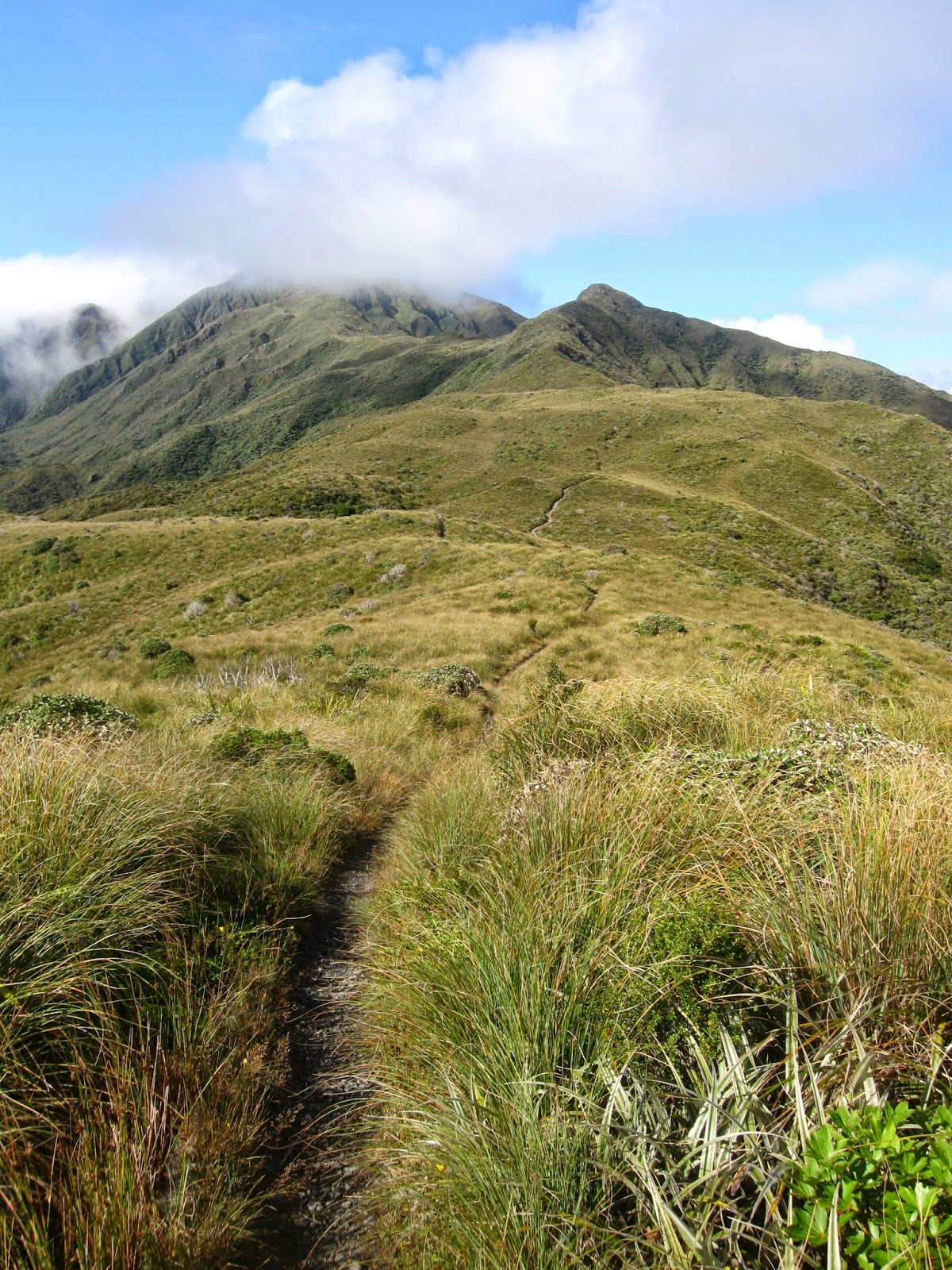 Heading from Field towards Kime
I headed up to Field Hut and then onto the turn off to the track along main range, just before Kime Hut. I had thought I might go all the way to Maungahuka. It was an unusual day, I had hoped the cloud would lift but the opposite happened.  As I made my way along the main range visibility dropped to about 10 metres. There was no wind so I stopped sat and contemplated. I found a few spots where you could hear the silence, almost no wind, no insects and just peaceful, noiseless emptiness, in a swirl of claggy cloud. I could never be a yogi on top of a mountain, and if you tried this in the Tararuas you would get blown off, however I do enjoy the solitude. As the forecast was for gale to severe gales for the following day and I was going solo I retraced my path back and spent the evening in Kime Hut. 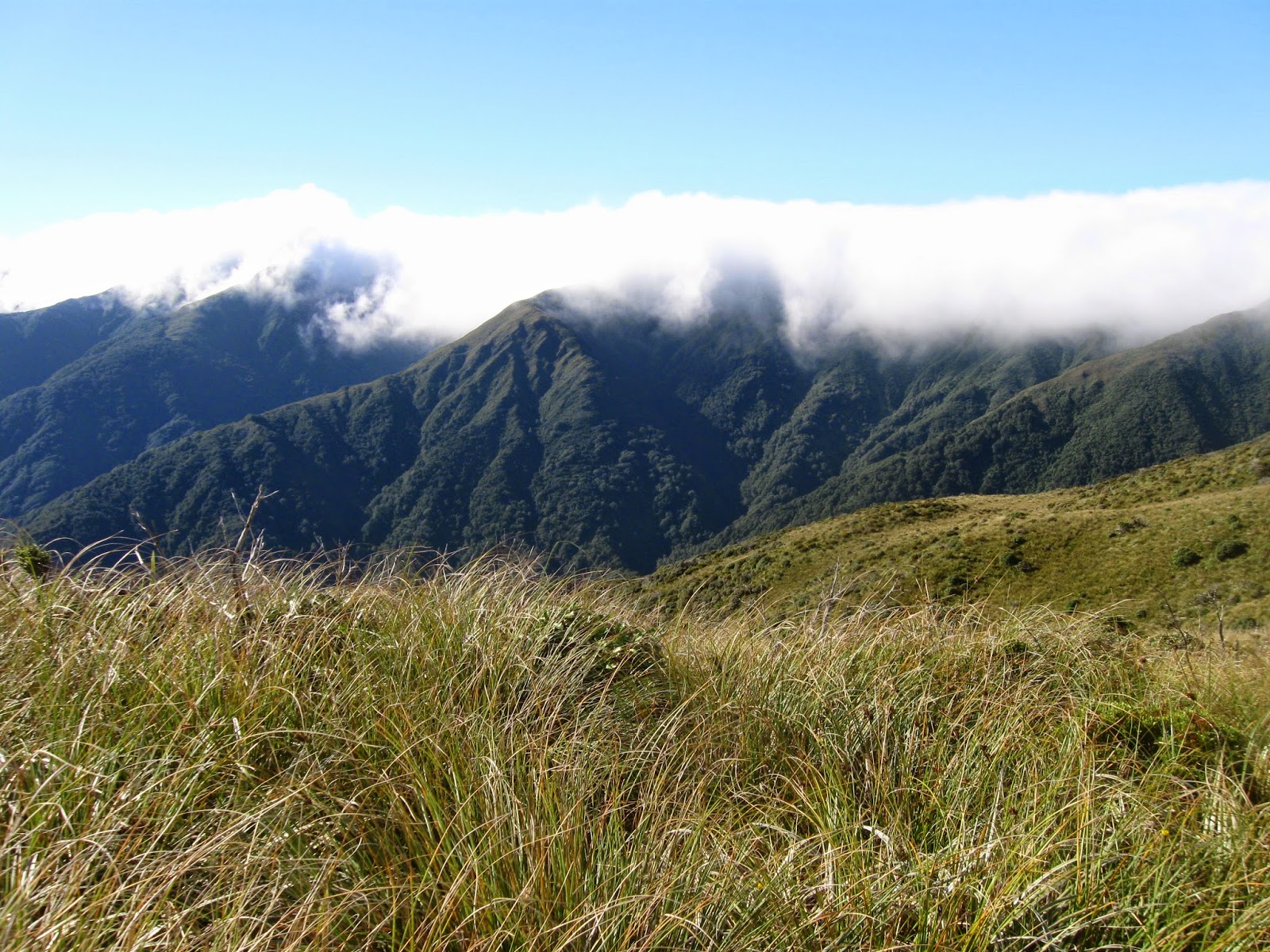 Cloud over the Main Range – It got a lot worse than this – taken from above Field Hut
This was the first time I have slept in the new hut. It is much brighter and bigger than the previous version but it was cold in the hut. One of the ironies of the new building code is that while new huts have to be double glazed and insulated, they also need to be vented because trampers use gas stoves for cooking. This means a free flow of circulating air in the hut. The internal temperature in the hut is about the same as the external temperature outside in the elements. This meant the temperature in the hut was above zero, but not by too much.
I meet a guy in the hut and I offered him one element of my standard tramping diet, sausages. I have brought my old favourites, kabonosy and chorizo criollo. We got talking and he told me that he makes his own sausages. His dad is Italian and he uses traditional family recipes and also other recipes he has gathered over the years. He was an affable fellow sausage enthusiast. You do not meet too many people who you can have a great sausage conversation with, let alone when on the Tararua mountain tops. This was an unexpected pleasure, and needless to say he appreciated the quality of both the kabonosy and the chorizo criollo.
As the forecast for the next day was severe gales later in the day, I decided to head back to the road end. It was a short enjoyable time in the hills. I liked the solitude and emptiness of being on the main range track. It was great to spend some time in the hills being alone and enjoying the silence of nature.

For other tramping and sausages posts here is an index.