This is second in an occasional series, see part one.

Yesterday I completed the aptly named Mukamuka Munter, a little sojourn around the south coast from the mouth of the Orongorongo River, up the Mukamuka Valley and a climb over South Saddle, over 500m above sea level, steep downhill into the Orongorongo River, down the river for a bit and out via the well travelled Five Mile Track. My watch put the distance at nearly 31km, with a variety of terrain covered, rugged rocky coastline (wave to the seals as you head past), scrambling over rocks as you go up the valley, evading the tree roots as you negotiate your way through the bush, and finally the graded and smooth Five Mile Track.

I know I am not as fit as in previous years, and it took me nearly half an hour longer than last year. One of the things I like about mountain running are the conversations you have with fellow competitors as you work your way through the course. I’m not sure what happens at the front of the field, but at the back we realise that winning is not an option, so the camaraderie of the fellow maniacs and those of unsound mind who seek solace in running up and down the hills is all part of the event. One of the runners filmed as he run, see his video here. Below is a screen shot of my run. 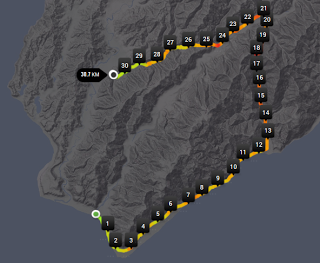 So what are the other rewards? Easy answer – sausages and beer.
I came home to a feed of pork and sage sausages from Freedom Farms. These are nice looking sausages that I purchased at Moore Wilsons. The packaging says the ingredients are 75% pork, water, wheat flour, salt, modified starch and few more ingredients. Freedom Farms say the pork comes the foot of the Southern Alps, where the piggies are raised naturally with grass and mudholes and deep straw shelters. 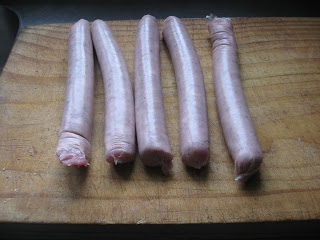 These sausages taste ok, the pork is the predominant flavour and the hint of sage adds to flavour. When I ate the first one I thought there was a lump of gristle or something rubbery and chewy. My wife ate one and spat out the chewy bits, there is a photo of these. So this is not so great. Good tasting sausages with little lumps of gristle, or something….. 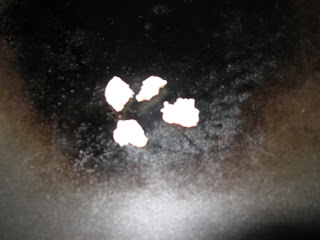 The packaging states, “We also like the idea of a nice coarse meaty texture.” The meat is ground to a consistency that is nearly pureed. I cannot align the statement on the packaging to the contents of the sausage. I generally prefer a sausage that is not finely ground. So as you can see I am not particularly keen on these sausages, although I liked the taste as did the family, but the lumps and the fine ground consistency did not do a lot for me. They were a disappointment after all my exertions and I will not purchase these again. In fact there is still one uneaten sausage, languishing in our fridge – unheard of!
Cost per kilo: $17.82
As for the energy drink, the depleted carbohydrates, sugars and salts were in the glass of fulsome goodness. A Yeastie Boys beer, Gunnamatta Pale Ale. This was a pleasant refreshing beer, nice golden amber appearance in the glass, easy on the palate a mixture of flavours with a slightly bitter aftertaste. The beer is flavoured with Earl Grey blue flower tea. This beer has won awards, deservedly so. 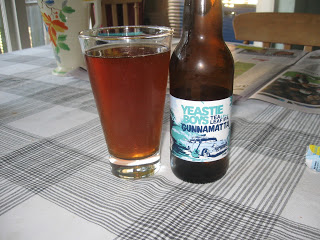