It is not all beer and sausages – Part Three


This weekend I was off to the highlight of the harrier season, the NZ Road Relays. This was held on the Sign of the Takahe to Akaroa route, 76km of varied terrain, run by a team of eight. This course is rightly regarded as the best relay course in NZ. Some teams turn up to win or medal. Our team sorted out our goals before the race – to have a good time and enjoy ourselves. I offered to bring sausages to feed the team.

It would be fair to say that the mighty M50 (men over 50) from Scottish Harriers would not put fear into the opposition with our running prowess. I ran the lap from hill top to Duvauchelle, which concludes with a long 5km of steep downhill. It hammers the legs and feet and I was knackered when I reached the finish. My legs and feet were sore and at the end of my stretch my team mates asked me how many toenails I had lost. I said my feet were sore and took off my shoes. In the supportive way we worked together, they said, ‘There’s no blood in your shoes, stop moaning and get into the van.”


At the finish the announcer said, “Here come Scottish’s M50A team, the first finishers in the M50 grade…..” What is omitted is, “from the 8.30am start.” Most of the M50 teams started at 9.15am.
We did not come last, and we were not close to the medals. However I can confidently say that we had the best selection of beer and sausages in our van. The teams had to carry a baton over the course – our team abandoned the baton supplied by the organisers and replaced it with a kabonosy. 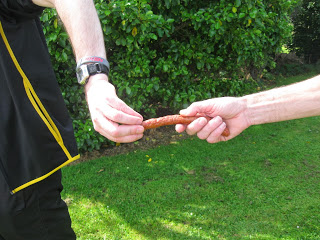 I cooked the sausages the day before our race. Not knowing my team members preference for sausages I brought a variety – kabonosy from Park Ave Quality Meats, (See review), pork and fennel from Island bay Butchery, (see review) and Cumberland from Cameron Harrison Butchers. From left to right, kabonosy, Cumberland, Sremska and pork and fennel. 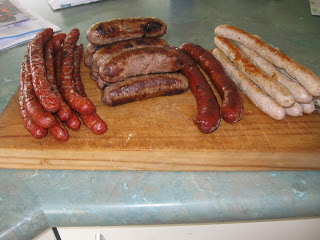 Comments from the learned, if tired, runners in the van: these are good, a very nice flavour, smell good and not too over powering. This was the kabonosy. One team member, in a moment of madness, even offered to run another lap if I could find him another sausage to munch on.
The sausages were appreciated and went down well after each team member completed their lap. The Cumberland were appreciated for the meaty taste, the pork and fennel for their flavour. The consensus was the most preferred sausage of the day was the kabonosy. I shared the sremska (see review) on the way back to Christchurch, but this did not have too many takers. I gave these out in smaller morsels. It is a spicier sausage and received comments about the strong taste.
Of course a refreshing drink was needed to rehydrate and in the van a selection of beers were present, Macs Pale Ale, Tsingtao and a Bismark Brown Ale made by Hancock and Co. This is a malty, hoppy, slightly bitter brown ale, best drunk cold, rather than after being in the van for many hours. However as a post race refresher it meets the mark. 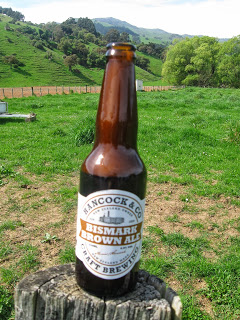 So the team had a very enjoyable jaunt from Christchurch to Akaroa. There were a lot of laughs, ribbing, jokes and irreverent comments about our respective running ability, while racing against other teams of a similar pace. There was a great spirit of camaraderie, enhanced by the snacking on sausages and beer. 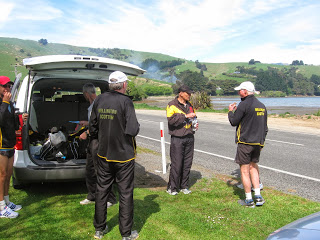 We will all be back next year for what will undoubtedly be another highly unsuccessful attempt at a NZ title, but with high anticipation that the day will one an pleasurable one.