Strict Standards: Static function Automattic\Jetpack\My_Jetpack\Product::get_manage_url() should not be abstract in /home/dodo1418/public_html/wp-content/plugins/jetpack/jetpack_vendor/automattic/jetpack-my-jetpack/src/products/class-product.php on line 182
 Celebrating the Ascent of Everest – Don Stevens Sausage Blog
Skip to Main Content
Celebrating the Ascent of Everest
Last evening we went to a friend’s house for an excuse to enjoy fine food, wine and convivial conversation. The 60th anniversary of the ascent of Mt Everest by Sir Edmund Hillary was the focus. This required dressing for the occasion. I wore shorts, a polyprop and a tramping shirt – ideal clothing for a climbing expedition. My wife decided to wear clothes that celebrated the royal coronation of May 1953. The diamonds were worn. This bracelet is not made of faux jewels; it must have tens of carats of diamonds set in platinum. 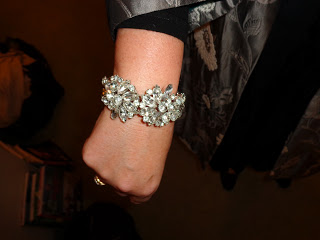 She also wore black spotted tights, she thought they symbolised a snow storm. I thought they were the beginning of frostbite and gangrene. 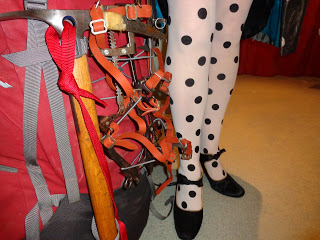 We had to take food. I did the old standby of sremska and blue cheese on crackers. See review dated 24 November 2012. Gordon at Park Avenue Quality Meats has started making sremska in a longer thinner casing. He tells me that he is selling more of them in this casing. I had four of these highly spiced sausages in the freezer. Here is a photo of the plate next to my pack with ice axe and crampons. You never know what the snow conditions will be like on the western face of Creswick Terrace, Northland in Wellington. 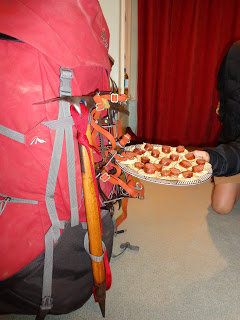 I made my entrance to the soirée, by tackling the technically difficult western face, this involved ascending a retaining wall and clambering over a fence onto the host’s deck. On a scale of difficulty in climbing, this has been compared as comparable to the Hillary Step, just below the summit of Everest. I did not have to use the ice axe or crampons, but was glad I had them in case of an unexpected blizzard. I had offered my wife the role of lead climber on the expedition. She declined. Although I would have enjoyed her company, the satisfaction of completing a difficult technical solo climb was immense. All other guests had taken the easier eastern route made up of a concrete path and steps. Needless to say the other guests were surprised when I entered the room through the western door. 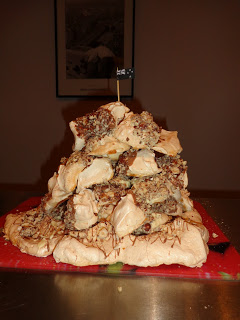 My wife made a dessert, a mountain of meringues, hazel nuts and chocolates. This was chewy, gooey and delicious. As guests tucked into the dessert I thought, as the last of it was consumed, the words of Ed Hillary resounded around the table, and “We had knocked the bast@rd off.”