Skip to Main Content
Skip to toolbar
It’s not all beer and sausages
Yesterday I competed in the Tararua Mountain Race. This is a race across the Southern Crossing route, usually a long two day, or three day tramp. There was 2250m of vertical climbing over the course. The track is rough and rugged. As the Italian runner, who had only just arrived in New Zealand, said to me in broken English as we struggled up the steep ascent to Alpha Hut, “There are so many tree roots in the jungle. I have never seen anything like it. I fell over four times.” Welcome to mountain running in NZ I thought, quickly followed by, we don’t call it jungle – we call it bush. However the nuances of language are not a topic of conversation as you are pushing it hard uphill. After 8½ hours I was knackered and delighted to have reached the finish line. There is a trophy for the first masters male. I only have to take nearly 3 hours off my time to claim this prize. Am I deluded or what?
Below are a couple of photos the Italian guy took during the race. These were taken going over the tops between Alpha and Kime Huts. I am the wearing the red pack in the second photo. Here is a video of the 2011 event. 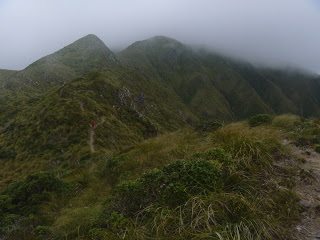 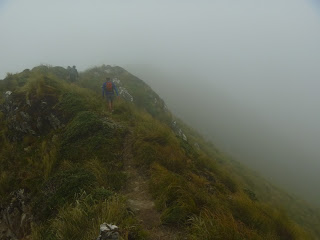 In some posts I have talked about the joy of the solitude of the NZ bush. I like being in the outdoors. Yesterday, however, it was hard work, pain and battling the mind during the harder sections of the course. The cloud was down, it came and went, so visibility was often down to around 30-50m on the alpine section of route from Alpha Hut to just before Field Hut, and the wind was blowing. It was not strong enough to blow you over (I have been in some events where this has occurred), but was strong enough to slow you down, or disrupt your balance at times. This chart gives you and indication of the ups and downs of the route. 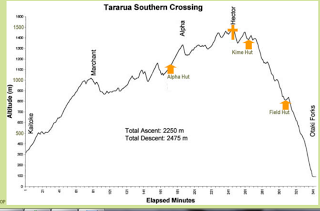 Anyway at the end of the event, for those who run at the back of the field, what are the rewards? The ethereal satisfaction of achieving your goal; or on a more base level:  beer and sausages. I came home to snack on Gipp St Butchers German Bratwurst and Pale Whale Ale from the Mussel Inn in Golden Bay. 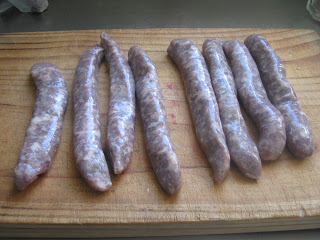 The German Bratwurst are made with 8kg of pork, 4kg of lean beef and secret spices according to the butcher. They are nice to eat and have a pleasant meaty taste. Cooking them on the barbecue they oozed quite a bit of fat. I would buy these again, however the family agreed that the bratwurst from Park Avenue Butchers are superior and they are cheaper too.
Cost per kilo; $22.95 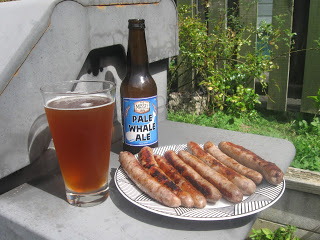 I had a Pale Whale Ale from the Mussel Inn in Golden Bay to wash the sausages down and replace some sugars and carbohydrates. There’s nothing like an energy drink after a hard days running! This beer is a slightly cloudy pale ale. It is made from organic hops and malt. It has a mild hoppy and yeast taste with a stronger aftertaste. A satisfying and refreshing drink to wind down after an exhausting day.  Alcohol content of this beer is 7%.
If you are ever in Golden Bay, the Mussel Inn is a must visit venue. It’s a relaxed converted farmhouse or woolshed, with rustic food and beer. They brew their own beer and also had their own range of non-alcoholic drinks for the kids and those so inclined. There is large outside area with a fire, and a big tractor tyre swing for the kids. Live music is performed there most nights, and the time we went there the place was rocking with a big local crowd turning out to see a Wellington gypsy brass band. It was great fun.
So all in all, a very good weekend. The Hurricanes beat the Crusaders convincingly on Friday night 29-28. The Tararua Mountain Race was successfully completed and the highlight was, of course, the beer and sausages.

And to see links to other parts in this series.