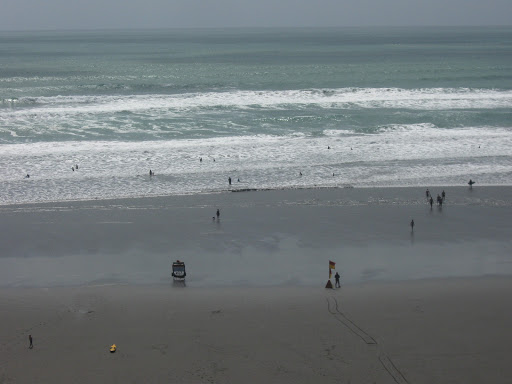 The Final Raglan Post
This is the final post from summertime Raglan – it was an enjoyable two weeks of sun and relaxation. The surf at the beach in the second week was a bit lumpy and uneven, however it was still vastly better than being in Wellington. I have a gps watch that I use for running, this watch has an open water swim function. Using this while boggie boarding it was able to tell me that I was surfing the waves at 29 seconds per hundred metres, this is considerably quicker than the world record for swimming a hundred metres which currently stands at 46.91 seconds. I do like the speed and power of the surf.

After another day at the beach we had snarlers for dinner. These were canela chorizo from Zamora in Queenstown. These are a medium to coarse ground sausage, cinnamon is the primary flavour. Of all the sausages I have sampled from Zamora this is one I liked the least, I guess I’m just not a fan of cinnamon. I had managed to perk some snapper and a couple of flounder, these were cooked up on the barbecue along with the snarlers for dinner, we also had aubergine smash, a chick pea salad, and roast spuds. 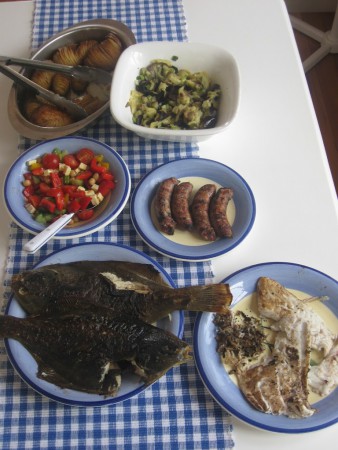 I did not do the best job of cooking the fish on the barbecue, the flounder was alright, however the snapper fillets came apart. I definitely more practice needed in the art of cooking fish on the barbie.
As this is the last post I must make comment about the great little butcher’s shop in Raglan. I consider Top Cut Butchers punches above its weight in the fine art of sausage making. Although I have been discursive about a couple of the sausages they have made, they make a wide variety of quality sausages tailored to the kiwi palate. If you are in Raglan I would recommend you pop in a grab a few snarlers for dinner. My favourite was the sweet chilli and plum, the only way you can identify your preferred sausage is the try them.
I hope to return to Raglan next summer to spend more time enjoying the ambiance of the place, with a special focus on the beach, and of course sausages on the barbie.