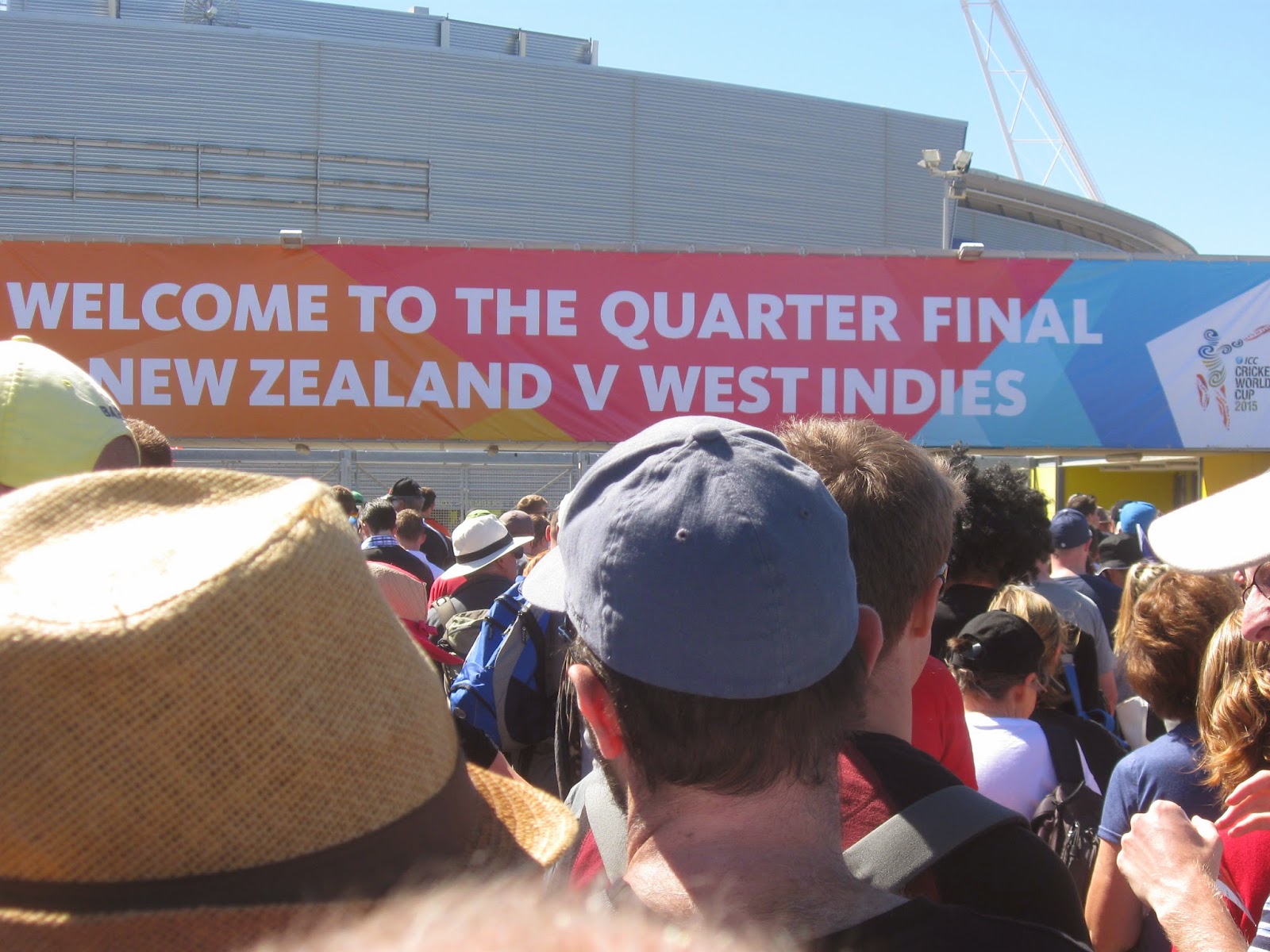 The cricket world cup has been heating up as the tournament has progressed. Yesterday in Wellington Martin Guptill exploded in one of the great days in New Zealand sport. With a few mates we headed to the stadium for the quarter final between New Zealand and the West Indies. New Zealand were favourites, but the West Indies had the danger man Chris Gayle. 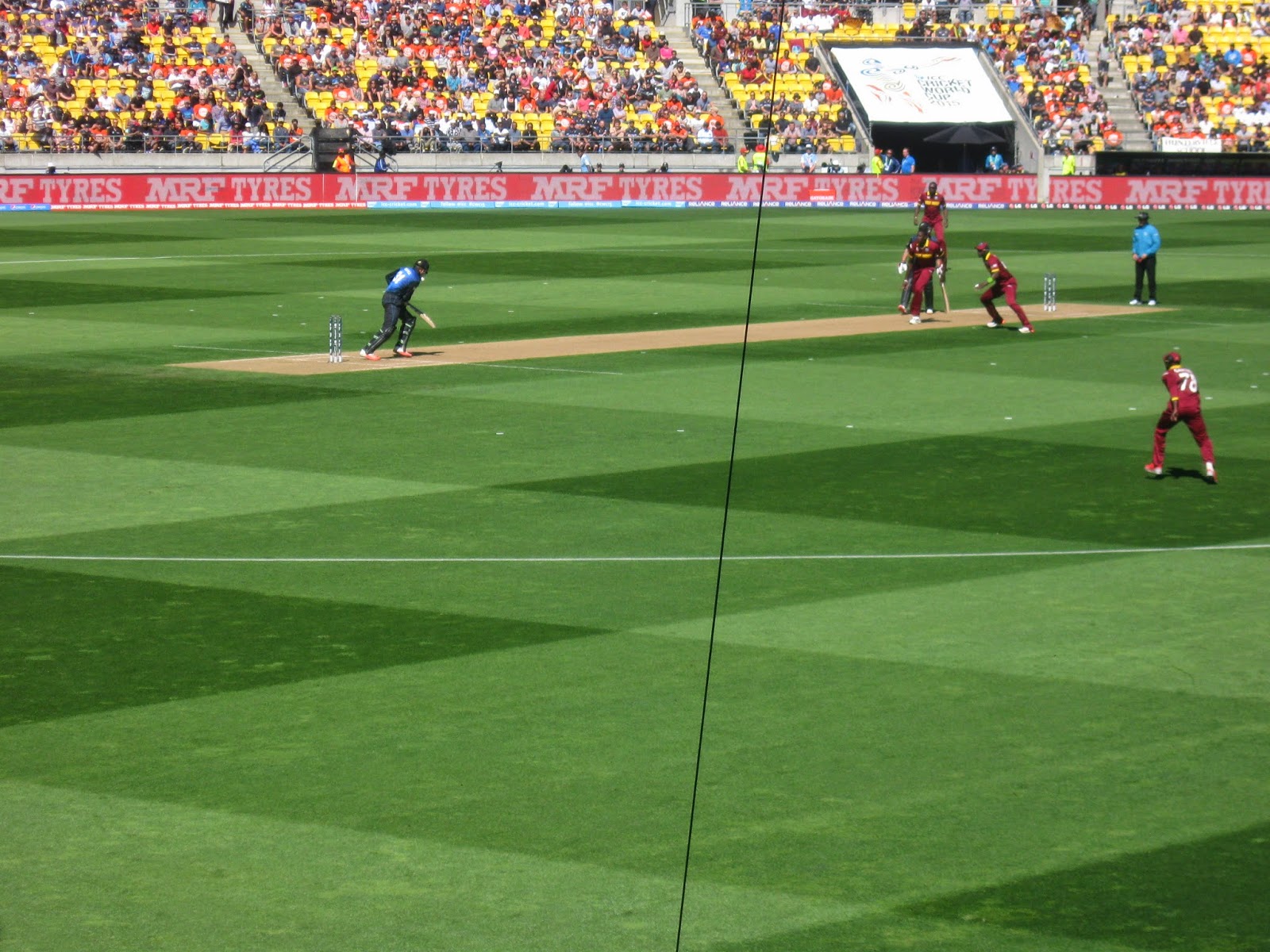 Guptill at the crease
Martin Guptill scored a memorable century of 111 balls before he went ballistic and scored another 137 runs off 54 balls. The ball was flying all over the arena in one of the great displays of power cricket. The West Indies in the field lost it as the players appeared to lose cohesion and not agree on the tactics to stop the juggernaut they were facing. Guptill’s final score was 237 not out, the highest score by an individual batsman in any world cup. The stadium atmosphere was electric – I have never been to cricket match where the crowd is chanting the batman’s name as the bowler runs in. 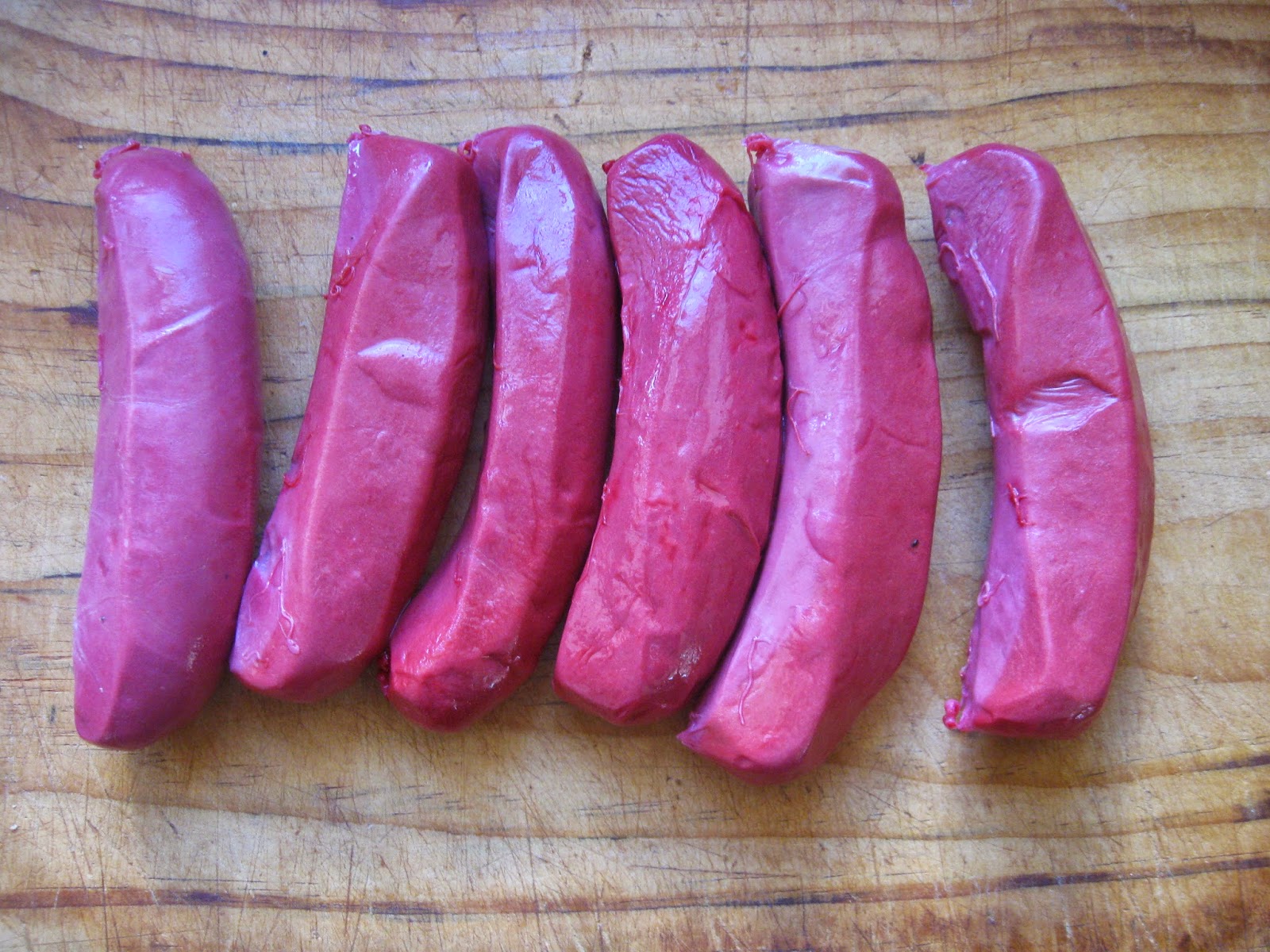 In the stands were we feasting on snarlers. I had perked some wild venison smoked saveloys. I can not tell you when I last ate a saveloy and I generally regard them as kid food. I boiled these up prior to the match and took them along. A mate at the cricket waxed lyrical about the cold saveloy sandwiches his mother used to make for school lunches, there was nothing but haute cuisine in Upper Hutt in the 1960s! These saveloys are minced to a fine pureed consistency and I would not have picked the meat as venison. They were moderately smoked, which added to the appeal. I regarded these as more of a novelty and although they were nice to eat it does not make me want to eat more saveloys. 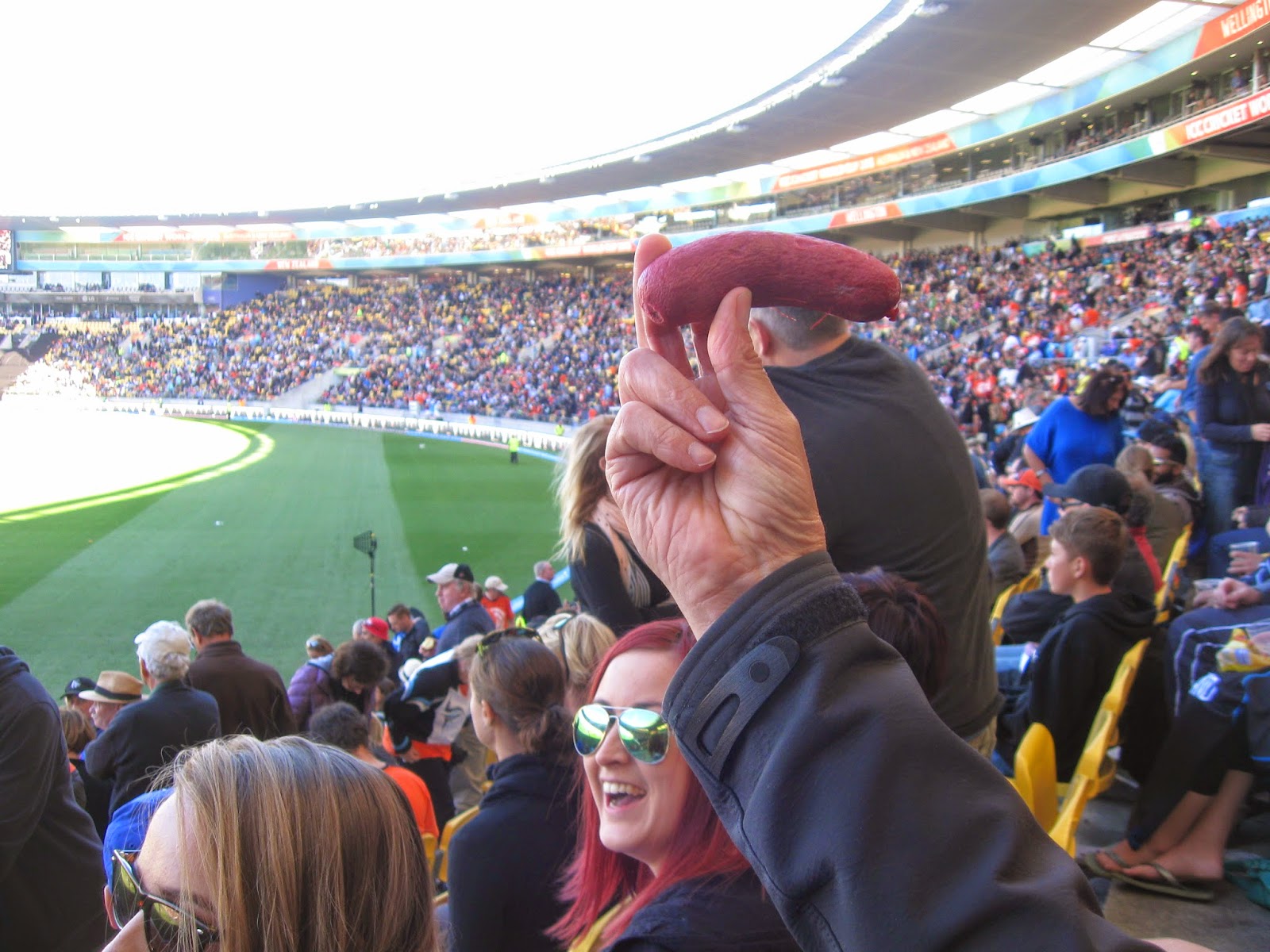 I also took some kabonosy and Argentine chorizo criollo, which remains my favourite sausage. All the snarlers were well received. The couple next to us laughed as I took a photo of the saveloy against the crowd. The photographic art shot of a snarler at a sporting event is clearly still not recognised by all as an important part of social commentary. 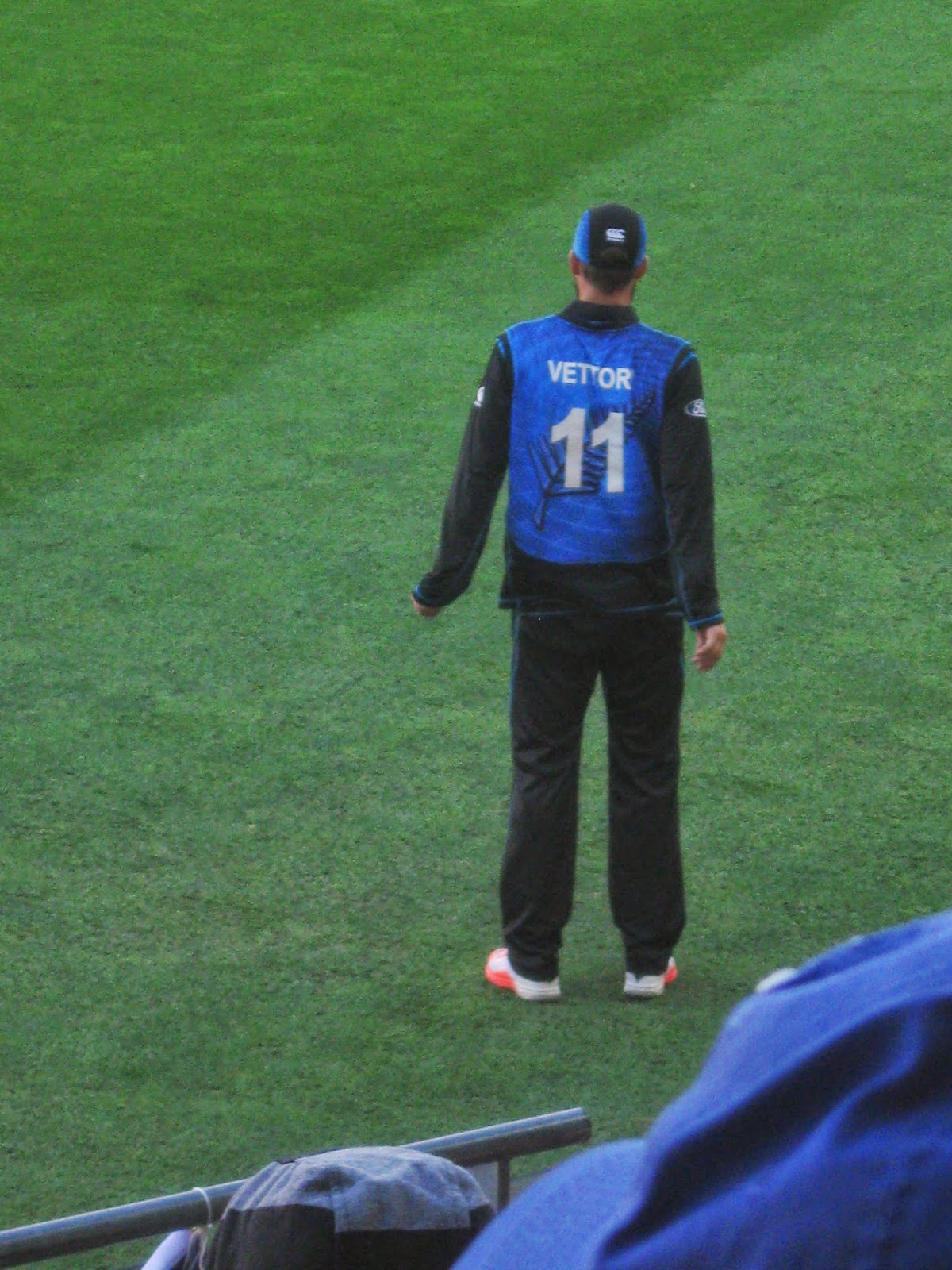 When the West Indies batted they chased the runs but lost regular wickets to be all out. Daniel Vettori took a fantastic one handed catch in front of the section of where we were sitting. While I had thought the match against England was great, this took the cricket to another level.
This morning the voice is hoarse from overuse, chanting and applauding some sublime cricket. Roll on Tuesday when NZ takes on South Africa in the semifinal, dare we dream of a first appearance in a cricket world cup final, or even better a win in the final?