For dinner I cooked our old favourites, snarlers, with the comfort food of mashed potato and a bit of broccoli for colour – a satisfying mid-winter meal. I put a bit of horse radish sauce in the mashed potato during the mashing and this really enhanced the flavour. Delicious was the family judgement. I went with a couple of sausages that I buy that are the old favourites – chorizo criollo and Dutch braadworst. I was in Park Avenue Quality Meats and Gordon, the sausage maker, identified a new product he had made, Litewska kielbasa. It’s a Lithuanian sausage that Gordon made after a Chinese customer brought in a recipe.
There was a migration from Lithuania to China in the early part of the twentieth century. This led to the creation and development of the Harbin Red Sausage from China. Harbin is the capital of Heilongjiang province, and the sausage from this area is more eastern European that Chinese. This Lithuanian recipe is similar in style to a Harbin Red. 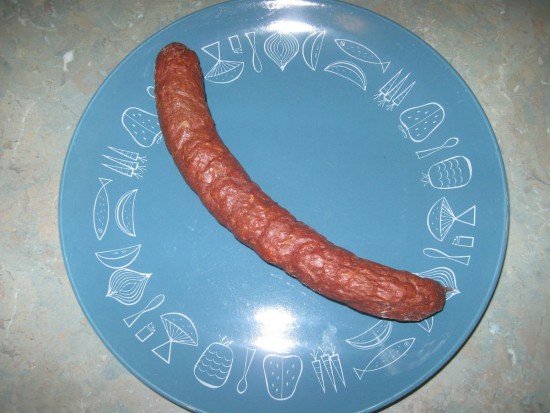 The meat for this sausage comes from the pig’s head, tongue and heart. It is finely ground and the dominant flavour is smoke. I really enjoy a smoked snarler. The secondary flavours are a slight heat from spice, maybe pepper and paprika. There was also a hint of what I thought was probably cloves. I only had one of these sausages so I sliced the sausage into bite size pieces. They were consumed by the whanau who all rated the sausage highly. The boys gave it a higher rating than my wife but we all agreed it was sausage that was worth buying again.
I may sound like a tried record, or for the younger ones, a sample on loop, however if you are after the best sausages in Wellington that have an eastern European influence then there really is only one place you should go – Park Avenue Quality Meats in the Hutt. They continue their tradition of making fantastic tasty snarlers. There is not another sausage maker in Wellington who gets close to these guys. If you do not live in the Hutt, it is well worth a visit to this little butchers shop. You will not be disappointed.