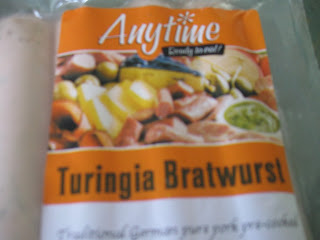 Peter Snell, Ian Ferguson, Paul MacDonald, Alan Thompson, Mark Todd, Danyon Loader, Valerie Adams, Georgina and Caroline Evers-Swindell have all reached the pinnacle of sport by winning double Olympic gold for New Zealand.
So in the culinary arts, or should that be the science of sausage making, can butchers reach the pinnacle of double gold? The answer is yes. Preston’s Master Butchers in Wellington won the pre-cooked/barbeque sausage category of the Devro NZ Sausage awards for a second time this year. See link. This sausage is sold under the Anytime brand.
I must declare that the pre-cooked and barbecue section is not a category of sausage that I would buy to sample. Those of you who read this blog will know I prefer a spicier sausage.
However, I was doing the family shop during the weekend and came across a stand giving away samples of the Turingia Bratwurst in New World and I got talking to the two guys were cooking up the sausages. They said they were very proud that, for the second year in a row, their snarler had won the gold medal. After the win sales have gone through the roof. They normally make two batches a week, but last week they had their biggest order to date and made 37 batches of the bratwurst.
The bratwurst came in a prepacked sealed package of 9-10 sausages. I brought three packs. When the first package was in the pan, I weighed the other two packs, there was a surprising difference. One pack weighed 508g, the other 639g. This means that the first pack is only 79% weight of the second. This is a big variation.
But let’s get to the nub of the issue: What does the sausage taste like?
The bratwurst is a pale colour and it cooks up nicely. Best of all it tastes good too. The pure pork filling is enhanced with marjoram, parsley and a touch of pepper and garlic. The label gives the content of pork at 82%. Monosodium is also listed as an ingredient.
The sausage is finely ground, and pre-cooked, so only heating is required. This bratwurst tastes good. It has a piquant flavour of the listed herbs and spices. The primary flavour is pork. My kids said they were very good eating, as they headed to the plate to get another one. I was remiss in not quickly taking a photo of the cooked bratwurst, so you can see that by the time I did this there were only two left. 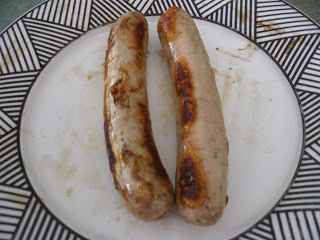 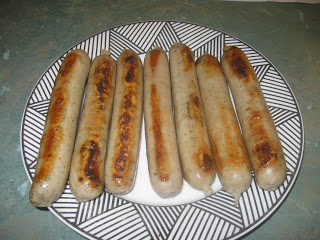 If you are looking for a sausage that will appeal to all then this sausage fits the bill. When you fire up the barbie these will please your guests. Personally I prefer these to Island Bay Butcher’s Bavarian sausage, which won the silver medal this year in the same category. Clearly the judges for this category agreed but individual taste is the key component here. The best way to determine your favourite pre-cooked sausage in Wellington is to try them both.
Congratulations to Preston’s Master Butchers for achieving a goal that I don’t think has been done before – double gold in the same category is a fantastic achievement. Roll on great summer weather and many pleasant barbecues.
Cost per pack: $7.99