Mt Karioi and chorizo
Over the next few weeks I will be competing in the Jumbo-Holdsworth Race. I see this as a warm up for the Tararua Mountain Race held five weeks later. As part of my training I decided to go to the top of Karioi mountain near Raglan. 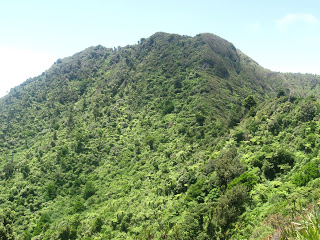 This is an old volcano that is close to the coast and stands dominant in the Raglan landscape at 756 metres above sea level. The route I took was up the Te Toto Gorge. This route follows the ridge on the true left of the gorge. It is not subtle, in fact it just goes straight up – deviations to make the route easier are not part of this track. There are even a couple of ladders provided to get over small rocky bluffs. In a number of spots chains are anchored into the rock, these assist the ascent and descent over a few precipitous points. The route follows the only place in the North Island where bush cover runs from the coast to peak. This bush is not majestic and the trees are not particularly large, maybe three to four metres high, however I was traveling up the ridge and I assume the exposure to the weather stunts the growth of the trees. The track is extremely rugged and gnarly, as I was travelling alone I did not push it too hard as it would be easy to do an ankle over the uneven terrain. 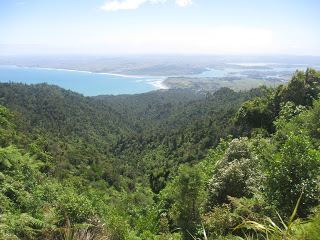 Raglan Harbour
When I reached the summit the view to Raglan Harbour to the north and Aotea Harbour to the south was well worth the effort of getting to the top. On a rock at the summit; surprise, surprise I found two sausages. Who would have thought? After tasting, and due consideration, I determined one of them was my favourite, chorizo criollo from Park Ave Quality Meats in Lower Hutt. I often mention this snarler and I still consider it is the best sausage available in Wellington. The other snarler was a Spanish chorizo from Top Cut Butchers in Raglan. This chorizo lacks complexity and balance in comparison – it is just hot flavour, too much chilli, pimenton or smoked paprika that dominates the sausage, a quality chorizo has balance with other flavours also present, I was not keen on this snarler. On the way down you there were great vantage points looking into the gorge. You could see good bush and even a small flock of keruru or wood pigeons flying down the gorge. From above they did not look like the slow flying lumbering fat birds you see from the ground level when they take off from trees, they gracefully glided down the gorge.
An added extra:
We took a day trip to Kawhia. I had never been there before so we visited Ocean Beach, just to the north of the harbour. On the beach there were a pair of NZ dotterels nesting, signs identified them and their nest site was cordoned off by stakes and rope. Dotterels are endangered, there are less dotterels that there are kiwis. About twenty birds live south of Auckland, so it was a privilege to see this bird and their distinctive run across the sand. Below is a photo of one of the pair. 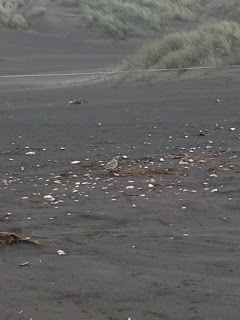 For other blog posts about being the hills, see this index.