Skip to Main Content
Satiated at Christmas
A good day was had by all yesterday. We had lunch at my sister’s home. A glorious Wellington day, the hottest since 1934 according to the paper, it was a humid 29 degrees. A running commentary on the cloud structures over the Orongorongo Ranges and the Wairarapa by brother in law the meteorologist meant any chance of thunder storms would be identified well in advance. The weather was fantastic. The kids ended up having a water fight, a great day to run around outside and get wet. As my boys realised you shouldn’t worry about water pistols or spray guns, the bucket is the most effective method of transferring a bulk amount of water onto a target. One adult was drenched; the rest escaped such a deluge. 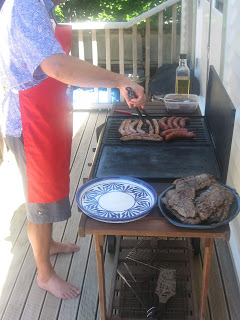 I barbecued sausages and steak. The steak was sirloin marinated in red wine, fresh ginger and an orange and tarragon mustard. The sausages were Island Bay pork and fennel, and Park Avenue kolbaz. 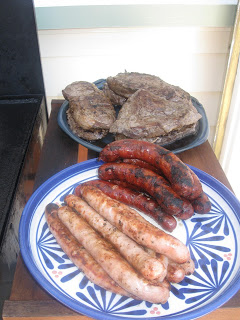 For review of the kolbaz refer to my blog post on the 11 November 2012. I have decided that kolbaz is best eaten cold; I had one sausage for lunch yesterday, and three for breakfast this morning. I have to get up increasingly early to beat my sons to the fridge!
I washed the food down with a beer, Emerson’s Bookbinder. This is a brown ale that is full of a malty flavour and refreshing on a hot day. My father in law, a man in his eighties said it tasted like Tui Beer used to taste like. He grew up in the Wairarapa in the 1930s and 40s. He said Tui used to get better with age. Tui is now a pale insipid beer that I try to avoid. 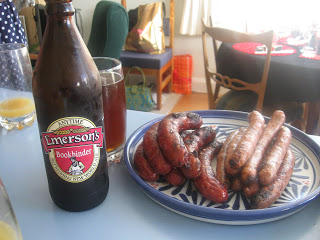 The Island Bay Butcher’s pork and fennel are a thin sausage, the fennel flavour is mild and compliments the finely ground pork. You can see the green flecks of the fennel interspersed within the meat, if seeds are used they have been finely ground. These were popular with the family and all the sausages were consumed and enjoyed. 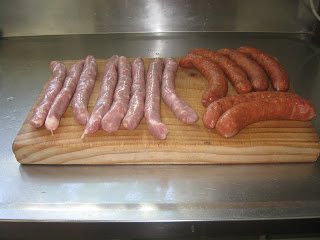 The other meats available for lunch were ham and salmon. 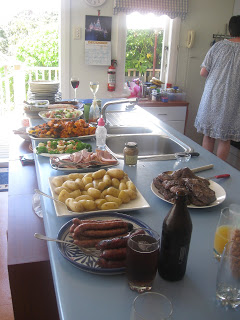 The barbecue was enjoyable and sausages we ate were appreciated. We all arrived home replete and satiated from another fine Christmas lunch.