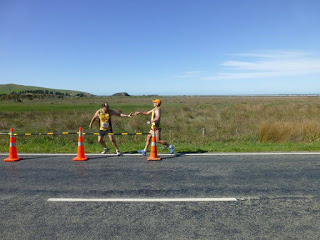 It is not all beer and sausages – Part Twelve 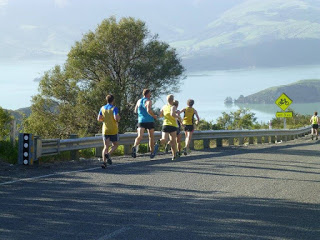 For the third consecutive year the NZ Road Relay championships were held over the Christchurch to Akaroa road course. This 74km, eight lap race is fantastic on a fine spring day, and yesterday was one of those days. The M50s from Scottish Harriers were light in numbers this year so we raced in the M40 grade with a wide array of ages in our team. I ran a flat leg of 9.4km in glorious running conditions, if anything it was too hot. I started off too fast and slowed towards the end kilometres, although I was pleased that I maintained an even pace over the last few kms. I was afraid that I might just run slower and slower, but I managed the last kilometre a tad quicker than the previous pace I had set. Although I had wanted to run faster I was satisfied with my time. I even managed to pass a couple of runners, while the speedy athletic juniors who ran a shorter course steamed past me at a great rate of knots. 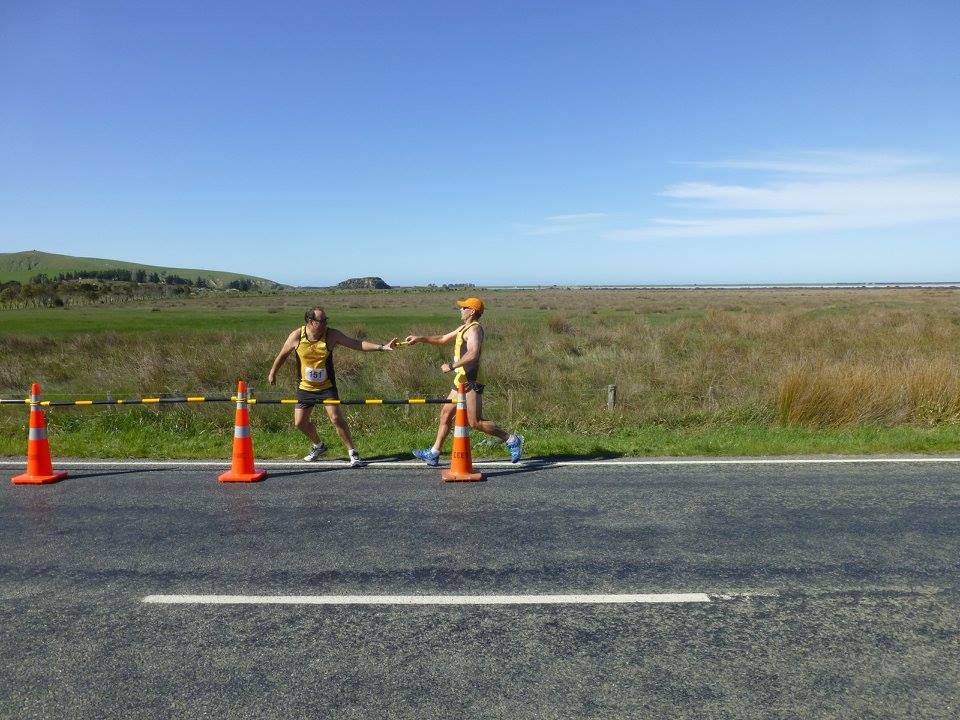 Speedy John hands the baton over to me.
As I have identified in previous posts about this event some people turn up hoping for a medal – we turn up to have an enjoyable time. There were 14 teams in our grade and we were a minute off achieving a top ten placing. In relays you compete against teams that are running a comparable race to you. We were particularly keen to beat our club’s Senior Women’s team. Although the lead seesawed as the event progressed we were able to prevail, and arrive before they did at the Akaroa Recreation Ground. 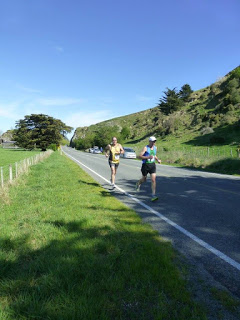 Although we did not figure at the sharp end of the event, I have no doubt that we had the best selection of beer and sausages in our van. The sausages were the perennial favourite of kabanosy and a Polish kranksy from Park Avenue Quality Meats. The beer selection in the van was Epic Pale Ale, Founders Pale Ale and Speights. We were able to soak in the sun, enjoy the heat on our backs and even witnessed rams becoming a eunuchs in one the paddocks as we passed. It was a very enjoyable day of camaraderie and bonhomie. 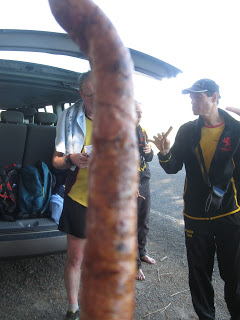 The kabonosy sausage were very well received – they have a meaty taste and moderate level of smokiness which seem to have universal appeal among sausage eaters. Everyone in the van preferred the kabonosy, which is what I expected. The Polish kranksy with an initial mild garlic taste on the palate, is followed by a hint of pepper. The Epic Pale Ale was refreshing with a mild taste of hops. 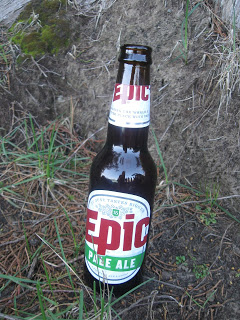 It is only on driving back to Christchurch that the distance you have covered is really evident – it is a long way. Next year’s event is in Rotorua and we will look forward to running over a new seven lap course in 2016.

For other parts of this series, see this index. 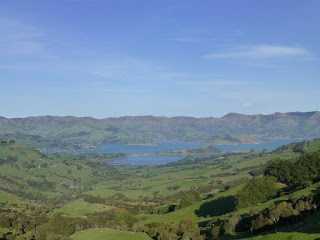 The view down to the finish and Akaroa Harbour.