Devro NZ Sausage Competition 2105 – South Island Regional Judging
I was pleased to be invited back to judge at the Devro NZ Sausage Competition. Now in its twenty second year, the appeal of tasting, eating and discussing the merits of quality snarlers was very high. It will be no surprise that I have always been a fan of a good sausage. The growth of quality sausages over recent years is fantastic for sausage geeks such as myself, and this is also a bonus for the palates of the everyday sausage eater. I travelled to Christchurch for the day and judged the rounds and traditional flavoured sections of the competition.
I was an atheistic judge. At our table we had two butchers, the owner and chef of a well known Christchurch restaurant, and myself. The butchers were technical judges. It is interesting dissecting a raw sausage and then comparing its cooked form with another dissection. After the olfactory senses are stimulated by the aroma the most interesting part, tasting and eating, occurs. The key element in any sausage is the taste. I will do a post shortly were I will share the judging sheets and while you might find it hard to believe, the judges do have to work hard on the day. 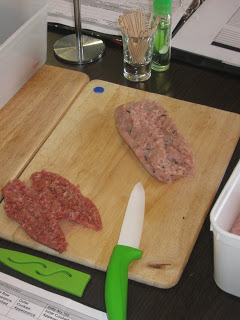 In the rounds we had a small number of black puddings and a white pudding. Black pudding is an underrated sausage in my view. A significant number of people think of the primary ingredient and then decline to sample. In my view they do not know what they are missing and we sampled an excellent range of puddings on the day.
In the traditional flavoured category, there were a large number of sausages with an equally wide variety of flavours. All judging is completed blind – the sausage is described and identified only by a number. 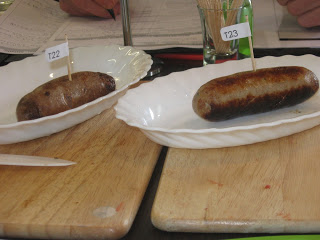 The gold medal winners have been announced and these sausages are off to Auckland for the final judging for the Supreme Award next week. In the categories I judged the gold medal winners were:
Having judged and eaten these sausages I can attest to their superior flavour and taste.
Between sausages we cleansed our palates, as a running mate said to me, “Do you use mashed potato to do this?”
The event was held at CPIT, Christchurch Polytech and at the end of the day I wandered into the centre of the city. There are swathes of empty blocks where commercial buildings once stood and multiple large building projects are underway as part of the post-earthquake rebuild. The cathedral looks forlorn. Anyone who lives in NZ will know there are a range of hotly contested views on whether to demolish the building or rebuild. Whatever the outcome it will be a big project. 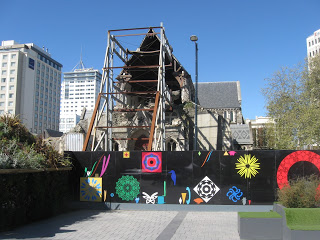 I look forward to seeing the result of the Supreme Awards next Wednesday.