Strict Standards: Static function Automattic\Jetpack\My_Jetpack\Product::get_manage_url() should not be abstract in /home/dodo1418/public_html/wp-content/plugins/jetpack/jetpack_vendor/automattic/jetpack-my-jetpack/src/products/class-product.php on line 182
 What is out the back at the Langham Hotel? – Don Stevens Sausage Blog
Skip to Main Content
What is out the back of the Langham Hotel?
We had a weekend in Auckland and stayed at the Langham Hotel. On Saturday night we had a meal with friends who live in Auckland. After a few drinks down at Britomart, we headed off to a couple of restaurants they were keen to eat at. We were turned away from both as they were too busy. The decision was then made to go the Langham’s restaurant, Eight. This had been recommended to us by friends.
We arrived at the end of the evening rush, around 8.30pm. Our waiter showed us around the kitchens that make up Eight and gave us a fulsome rundown. The concept of the restaurant is eight kitchens with different cuisines. You select the food, tell the chef how you want it cooked and the chef then cooks this while you watch. Then you eat it, returning back to the kitchens as many times as you like. One of our party was gluten free – she was easily catered for, had lots of food choices and helpful staff were ready to identify the gluten free options for her.
The kitchens at Eight are an American style grille serving meats, Asian noodles and dim sum, Indian cuisine including a tandoor oven, fresh seafood and oysters, sushi and sashimi, French pastries and crepes, and dessert. I started with a dozen raw oysters, they slipped down so easily that later in the evening I came back and had a half dozen top up.
In the meat kitchen our waiter identified that there were fourteen meats to choose from. I looked for sausages but none were present. However, all was not lost for later in the evening I spied some sausages in the meat display. Naturally I got talking with Brian the chef. He was very helpful, obliging and an interesting guy. He told me they had a selection of sausages out the back. By now I was extremely interested. The selection were: chicken, white chocolate and coffee; venison, chorizo and shrimp; and finally a venison curry sausage. I would describe the sausages as petite, small and thin, a good snacking or tasting size. All were a medium ground sausage. Brian informed me they were the inspiration of the restaurant’s executive chef and are made off site. The sausages are served as part of the breakfast and lunch selection at Eight. I was delighted that as a sausage eater they had made it to the premier meal of the day, even if it was after most of the punters had left the restaurant. Brian the chef is affable, friendly and he certainly knows his sausages. He was a pleasure to talk to as he cooked up the morsels to be eaten. 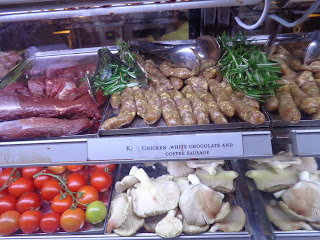 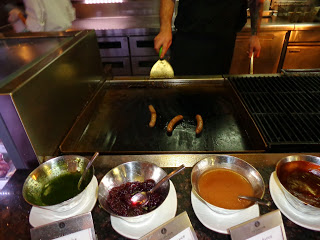 Sausages on the grill. Once on the plate, the brown sausages and brown plate does not make great culinary photography.


Chicken white chocolate and coffee
This is a unique combination of flavour, the subtlety of chicken meat, combined with the sweetness of white chocolate and bitterness of coffee. I do not drink coffee, and I found this flavour to be strong. My wife, a woman who needs a coffee to get the day going, found the coffee flavour to be subdued. The flavours complemented each other. This is not a sausage to base a meal around, rather it is morsel of different flavours and I consider it works well within a meal of many components. If you are at the Langman it is well worth a try.
Venison chorizo and shrimp
Another interesting combination. Seafood has a delicate taste and balancing this with the strong flavour of chorizo would be a challenge. In our group this was our favourite sausage, however none of us could detect the shrimp. It was a soft and easily chewed sausage, the spice of the chorizo was subtle and not overpowering. There was not the strong after taste you get with many chorizo. I would describe this as very mild venison chorizo style of sausage, and if you are at the Langham, check this sausage out. 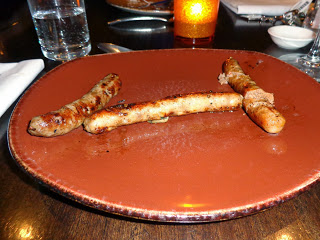 Venison Curry
This was the least favourite sausage of our party. Venison sausages are not my meat of choice. I prefer pork, beef or lamb. These sausages were venison with a light curry flavour. They were fine to eat but did not appeal as much as the other sausages to those at our table.
So in a meal of wide ranging flavours, these sausages formed a small but significant part of our evening. Great company, plenty of laughs and fine food augmented with petite, flavoursome, specialty sausages. And the answer to the question I posed at the beginning? Quirky and tasty sausages.