Skip to Main Content
Sausages selection on a six day tramp
My sons and I headed for the hills and went tramping in Nelson Lakes. This New Zealand National Park is a fantastic place to enjoy the majestic grandeur of mountains and the beauty of being in a wilderness environment.
Taking enough provisions for two hungry boys and myself for six days meant the packs were heavy. The usual tramping and sausage diet was to the fore (refer to post of 11 Nov 2012). This involved a ration of four sausages per day per person. The boys selected Island Bay pork and fennel (reviewed 26 Dec 2012), and Park Avenue kabonosy (reviewed 12 Aug 2012); while I chose the Park Avenue kolbaz (reviewed 11 Nov 2012). Twenty-four sausages each, a total of seventy-two sausages were packed, which were all cooked before we left for the tramp.
Our trip took us up the Travers Valley, over the Travers Saddle into the Sabine Valley, up the valley to Blue Lake, down the Sabine Valley to Lake Rotoroa and then out to St Arnaud. 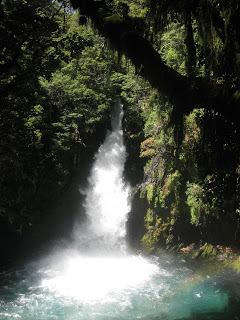 There is magnificent scenery on this trip and we also saw random sausages – in fact everywhere we went we seemed to see sausages. Here is an image of a kabonosy sighted at the twenty metre high Travers Falls. 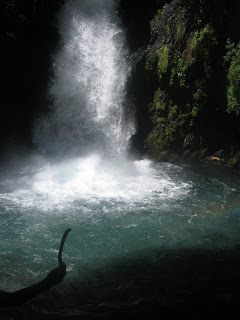 In the alpine vegetation above Upper Travers Hut I found these alpine pork and fennel examples. 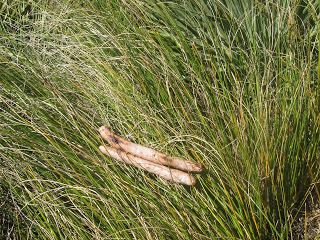 Sitting on top of the waratah that marks the top of the Travers Saddle was a kolbaz. The peak of Mt Travers can be seen in the background. 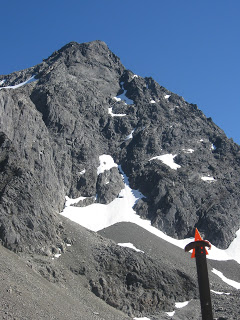 While heading up to the Travers Saddle the air was so still that if you howled the sound echoed and resonated in the valley. I was seeking lycanthrope beings. No response was received; however this does not mean they are not present.
I particularly like the many cascading waterfalls that come down from the ridges and into the valley. This image comes from the Sabine Valley below Blue Lake. 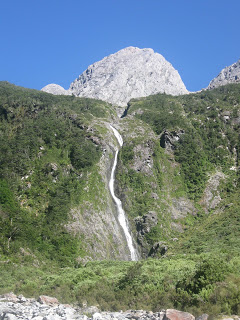 At Blue Lake the clearest water in the planet exists. This due to the water being filtered by moraine debris that sits above the lake. Lake Constance empties into Blue Lake through this mass of rock. Scientists have established that visibility in the lake can be up to 85 metres. Distilled water has a visibility of 82 metres. This area was going to be left as a wilderness; only the hardy and self-sufficient would make it up to this area. There would be no tracks or huts, but in the late 1960s it was opened up against some opposition. One the primary objectors was obviously a hard man. In 1962 Les Molloy went to Blue Lake in winter when the snow was so deep that his party had to camp and sleep and in the branches of beech trees. He did not want to make the wilderness experience too easy. I am obviously less of an outdoors man than Les, and readily seek and enjoy the comfort of a hut. 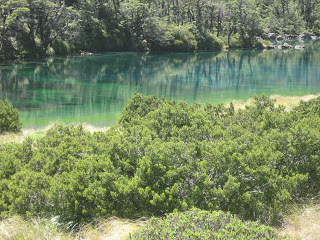 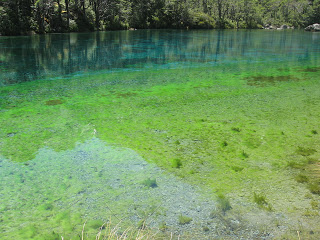 Guess what? At Blue Lake a kolbaz was sighted. After extensive investigation it has been established that the superhero (or should that be supperhero) Sausage Boy was present. He was holding the sausage. Thanks to Sausage Boy. 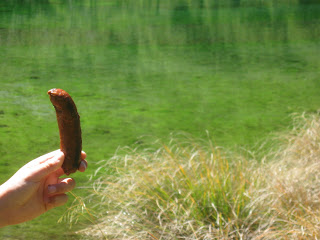 The trip was a great success fantastic weather, good tramping and glorious sausages.