Skip to Main Content
Oui Oui Saucisse along with Oink Oink and Fennel
With French like this; yes, yes sausage, I could become a translator. Through the marvels of the NZ education system, and one year’s study of third form French I could remember oui oui, the saucisse came from a translation service on the web.
Our family is on holiday at Pohara in Golden Bay, in the north of the South Island. The weather is good although rain is forecast. Tonight we barbecued. The sausages on the menu where a French Sausage: Toulouse and Harmony pork and fennel. Both sausages were purchased from Moore Wilsons in Wellington.
French Sausage: Toulouse
This is handmade by Salumeria Fontana Ltd in Wellsford in Auckland. It won the Cuisine Magazine Artisan Award in 2009. These sausages are gluten and wheat free and use no preservatives. The six sausages in the pack weighed 300 grams, around 50 grams per sausage.
Check out their website http://www.salumeriafontana.co.nz/Sausages.htm
These sausages were nice to eat. They are a small sausage in both diameter and length, they are finely ground. The meat used is pork sourced from Murrellen pork in Ashburton. The sausage casing is a fine thin product, and is open at each end. The meat remained in the casing during cooking; there was not an issue with any of the meat trying to ooze out the ends. The flavour of these sausages are a gentle meaty taste, I assume garlic, wine, and pepper were used to enhance the flavour. The family liked these. I would purchase these again. 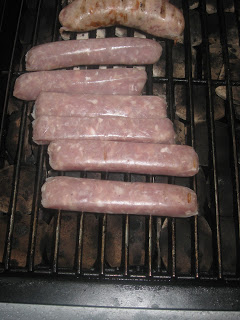 Harmony Pork and Fennel
Compared to the sausages they were served with, these are fat sausages and make for a hearty meal. These sausages are a ground to a medium constancy. They could be called pork with a hint of fennel. You can see the fennel seeds that are used as part of the receipe, however the fennel taste is faint and subtle. The meaty pork taste is the dominant flavour. My wife and son prefer the Island Bay pork and fennel (refer to posting Satiated at Christmas 26 December 2012) where the fennel flavour is more pronounced. My other son and daughter prefer the Harmony. Isn’t it great that we live in family were divergent views are held, and conversation at the dinner table relates to the relative merits of respective sausages. I am neutral and will eat both. 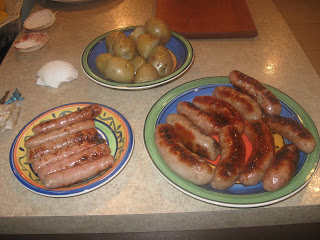